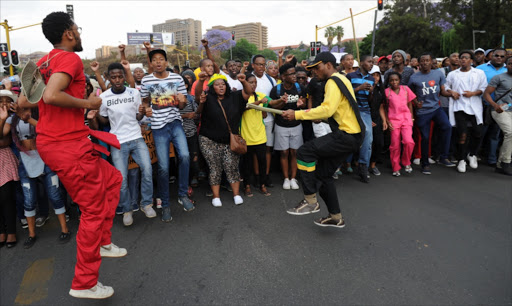 Wits students during a protest over the increase of tuition fees. Picture Credit: Gallo Images

Claims processed by the state-owned insurance company Sasria in the first two months of the year for damage to property caused during student protests totalled R92m.

Damage related specifically to the #feesmustfall protests were estimated at just over R42m‚ Sasria said on Wednesday.

Of the 188 claims processed‚ 140 were related to the #feesmustfall protests‚ it added.

Sasria’s Managing Director Cedric Masondo said there had been a steady increase in both the frequency and severity of claims related to protest action over the past four years‚ adding that frequency had increased by an average of 56% during this period.

“Further‚ while all of South Africa’s elections since 1994 have been largely peaceful‚ there is often a rise in service delivery protests in an election year. This risk will be exacerbated by what Finance Minister‚ Pravin Gordhan‚ has predicted will be a tough year for the economy‚” Masondo said.

He added that the increase in protest-related claims would have a knock-on effect on the economy‚ which was already under strain.

“Not only do damages experienced during these protests represent a direct loss for the affected parties and a major cost for insurers‚ they also have an impact on investor confidence and the value of the rand.

“The cost of the protests to the broader economy is difficult to quantify‚ but there can be no doubt that it has been — and will continue to be – substantial‚” Masondo added.