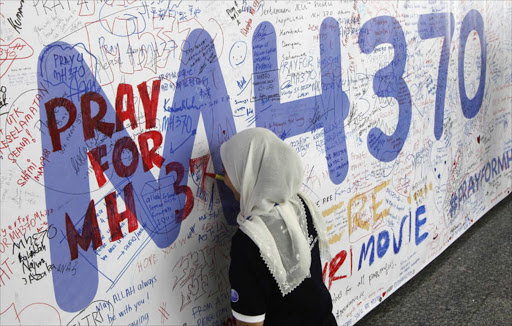 Relatives of a dozen Chinese passengers aboard missing flight MH370 filed suits against Malaysia Airlines, Boeing, Rolls Royce and others Monday, a day before the second anniversary of its disappearance and a legal deadline to do so.

Packed into a small office at the Beijing Rail Transportation Court, which has been designated to handle MH370 cases, they held manila folders with litigation papers in their hands.

Several wiped away tears, turning to borrow tissues from neighbours, before depositing their documents with court officials.

Gao Xianying, 65, who lost her daughter, son-in-law and three-year-old granddaughter on the flight, said: “Successfully filing the case is the next step in finding my family. We’re a step closer to demanding the truth from Malaysia Airlines; there’s more hope than before.” The Boeing 777 aircraft, with 239 people — including 153 Chinese citizens — on board, vanished en route from Kuala Lumpur to Beijing on March 8, 2014, and authorities said it went down in the southern Indian Ocean.

Even while suing for the wrongful deaths of their loved ones, many Chinese next of kin consistently express beliefs that the passengers are still alive, perhaps being held at an unknown location — even though a piece of the plane washed up on the Indian Ocean island of Reunion and other potential debris was found in Mozambique.

Under international agreements, families have two years to sue over air accidents. Lawyer Zhang Qihuai, whose Lanpeng firm represents the group filing suit on Monday, said many were “deeply conflicted” over the decision to go to court.

“They think that after you’ve accepted compensation, the company can deny any further responsibility and wash its hands of the incident, and that the public will naturally forget about the whole thing,” explained Zhang.

The total compensation requested from Malaysia Airlines, Boeing, engine manufacturer Rolls Royce and insurance companies ranged between 10 and 70 million yuan ($1.5 million to $10.8 million) per family, he said. Verdicts might not come for two years, he added.

“Originally, many didn’t intend to sue and instead wanted to continue waiting. But there’s a time limit, so they have no other choice — losing the right to sue would be terribly painful.” His clients have declined settlement offers of 2.52 million yuan per victim, he said.

Several US, Malaysian, Australian and Chinese law firms have told AFP they have begun filing suit on behalf of relatives, seeking undisclosed damages.

Malaysia Airlines and Boeing representatives in China declined to comment on the lawsuits to AFP. Rolls Royce did not immediately comment.

A vast Australian-led search of 120,000 square kilometres (46,000 square miles) of the southern Indian Ocean seabed has so far failed to locate the wreckage, and authorities plan to end the operation — projected to cost up to $130 million — if no new leads emerge by the time it is completed, expected in July.

The relatives hope that court scrutiny will help reveal answers about what befell the plane, even while some express misgivings over negotiating compensation.

“The date March 8 is like a knife that has stabbed us once again,” said Gao.

“I chose to prosecute in order to have my child safely returned to me. I’m convinced that the plane didn’t crash into the Indian Ocean, that it landed somewhere and that my child is safe, living on this earth.” She would never believe her family had died until their bodies were found, she said.

“You can scream your excuses until the heavens and the earth come down, for a thousand years or ten thousand, but without concrete evidence I won’t believe it or accept it. I want the truth! Where is the plane? Where are the passengers?” she asked.

Others were more sanguine. Lin Xinmao from the central province of Henan, who lost his only daughter on the flight, simply shook his head when asked if he retained any hope.

Zhang said his clients’ desire to learn the plane’s fate put them under enormous pressure.

“In their hearts, the families are slowly accepting the reality that their relatives are slipping further and further away from them, but they are also very unwilling to accept that reality, always waiting for them to come home at a moment’s notice,” he said.  “It’s very painful.”