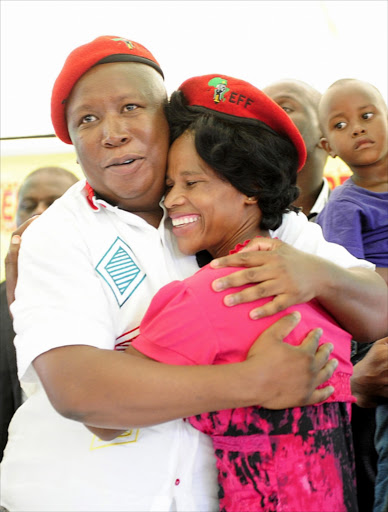 President Jacob Zuma’s Nkandla neighbour Sthandiwe Hlongwane, a former EFF member, on Friday said she knew her president would be happy that she had gone back to the ANC.

The unemployed 32-year-old former Economic Freedom Fighters member was welcomed back to the party by ANC Youth League President Collen Maine in Nkandla on Thursday. Maine was conducting door-to-door visits in Nkandla, KwaZulu-Natal.

EFF leader Julius Malema had a house built for Hlongwane in January 2014 as part of the party's general election campaign. As soon as the house was handed over, the roof caved in, the walls and the tiles cracked - and it had no running water.

Hlongwane made several attempts to inform Malema about the house and eventually the EFF leader sent contractors to have the house demolished and rebuilt. However this did not happen.

Instead, the contractors plastered the inside and the outside of the house, levelled the veranda, put in new ceiling boards and installed an outside sink.

Hlongwane said the poorly constructed house was not the reason behind her sudden about-turn.

"Last month, I was sitting at home thinking about everything that has happened and I thought that it was time to go back home.

"I was not happy with the EFF anymore, they stopped coming to Nkandla, they stopped listening to my complaints about the house and I felt neglected."

Hlongwane said she did not want to discuss the house anymore.

She said it was unfortunate that she was being labelled, by some, as having used the EFF to have a house built.

"I did not choose the EFF, I did not even know about the party until that day. I voted for them to show my gratitude for what they did for me."

She said she was going to vote for the ANC in the next general elections.

"I don’t know what the president thinks of me, but I would imagine he is happy that I am going to vote for him and that I am back in the ANC."

The mother of two said she would like to thank the EFF leader and his party for the house.

"It is not personal. I am grateful for everything."

She also had some advice for Malema: "If you make a promise to someone, you need to follow through on it and make sure that you do what you said, and do it properly, otherwise things can go wrong."

Hlongwane said she was at peace with herself, especially now that Zuma’s son, Edward, had extended an invite to her to come and enjoy a cup of tea with Zuma’s first wife, Sizakele MaKhumalo Zuma.

"He said I should come and visit MaKhumalo. I have always felt welcome at the homestead; even when I was in the EFF, but now it is even better that I am ANC again," she said.