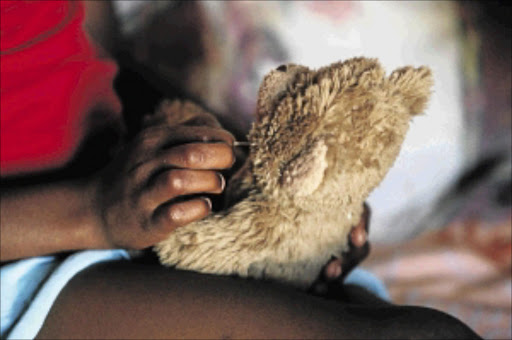 SUFFER THE LITTLE ONES: This six-year-old from Mofolo in Soweto was raped by a stranger for two days in his shack Photo: Lucky Nxumalo

At least eight women and girls in the Central African Republic have been raped or sexually exploited by United Nations peacekeepers‚ according to Human Rights Watch.

In a statement on Thursday‚ the organisation says that UN peacekeepers known as MINUSCA had been documented between October and December 2015 and were found to have violated these women mostly near the Bambari airport in the centre of the country.

“In a country where armed groups routinely prey on civilians‚ peacekeepers should be protectors‚ not predators‚” said Hillary Margolis‚ women’s rights researcher at Human Rights Watch.

The documented sexual exploitation and abuse alleged by the Human Rights Watch has also been found to correspond with the deployment of Republic of Congo peacekeepers.

Among the victims was a 14-year-old girl who said that she was attacked by two soldiers when walking past the airport base. “The men were dressed in their military uniforms and had their guns‚”… “I walked by and suddenly one of them grabbed me by my arms and the other one ripped off my clothes‚” she said.

“They pulled me into the tall grass and one held my arms while the other one pinned down my legs and raped me.”

Inappropriate sexual behaviour by the peacekeepers is not uncommon‚ said another of the victims‚ who is 18 years old and admitted to having exchanged sex for food and money from them.

Friends of hers in the community convinced her to engage in the trade as a means to relieving her food and money problems as a result of being the only one of her family still alive.

She said: “I got it in my head to go there. I already knew they were asking for sex. I said to my friends‚ ‘Ok‚ my father is dead‚ my mother is dead. I can’t just die’. I followed my girlfriends‚ and the things they did‚ I did.”

Human Rights Watch has said that the UN and troop-contributing countries should put into operation effective measures to investigate these crimes and bring those responsible to justice.

Survivors of attacks are said to be members of a community living at camps for internally displaced people in Bambari.

“Peacekeepers who rape‚ exploit‚ or kill should not simply be sent home with no commitment to justice‚” said Lewis Mudge‚ Africa researcher at Human Rights Watch. “The UN should use its full leverage with troop-contributing countries to ensure that those who abuse victims and tarnish the UN and its mission face justice befitting their crimes.”

According to the report‚ current policy states that if an allegation is substantiated‚ disciplinary measures — including prosecutions — are determined by the soldier’s home country. Direct action by the UN is limited to repatriating the accused peacekeepers and barring them from any further peacekeeping missions.