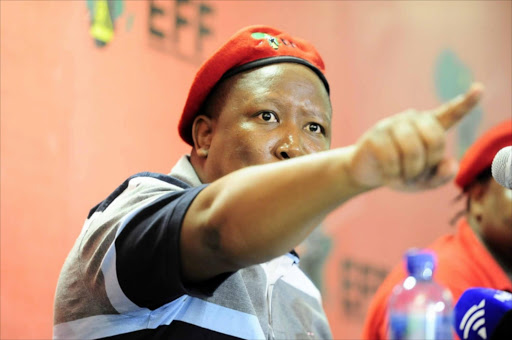 Gupta family must leave the country with immediate effect; this is according to Economic Freedom Fighters (EFF).

Leader Julius Malema revealed that the EFF has launched a war against the Gupta family because they are corrupt.

In a stern statement made at the party's headquarters in Braamfontein, Malema said the Guptas are not a legitimate body and that their businesses are a 'machinery for corruption'.

He said that the EFF are going to take physical actions against them and President Jacob Zuma during their march to the Constitutional Court on February 9.

"The Guptas are not in the media business and anyone working for the Guptas is perpetuating corruption," said Malema.

He also urged The New Age and Africa News Network (ANN7) journalists to stop coming to EFF briefings because it is 'not safe for them'.

"Our sisters and brothers brothers in Gupta firms, we love you so much we don't want you to be casualties. 'Suka endleleni (move out the way)," he said.

Malema said that the planned EFF march taking place on the 9th of February is a war against the Gupta family and President Jacob Zuma, amalgamating their surnames to 'Zuptas'.

"We can't have a situation where we are controlled by a family. Zuptas must fall."

Malema made the surprising comments after stating that they will not accept President Zuma's settlement offer until he takes chapter 9 institutions 'seriously'.

"Our response is very clear, we are not going to agree to a settlement that, one, does not reaffirm the powers of the Public Protector.

Answering a question on whether they were surprised by President Zuma's sudden change of heart on the Nkandla issue, Malema said they are not surprised because they knew that he will pay when they announced that they are going to the Constitutional Court.

He said that the office of the Public Protector is no longer respected like it was before President Zuma came in power.

Malema also vowed that the EFF will stop President Zuma during the State Of the Nation Address (Sona) should he not open by explaining why he fired former Finance minister Nhlanhla Nene.

He said that the country has lost billions of rands because of the removal of Nhlanhla Nene and no one is doing anything.

He said that EFF Members of Parliament are not scared of getting beaten by Public Order Police.

“That it will not be for the first nor the last time,” he said.