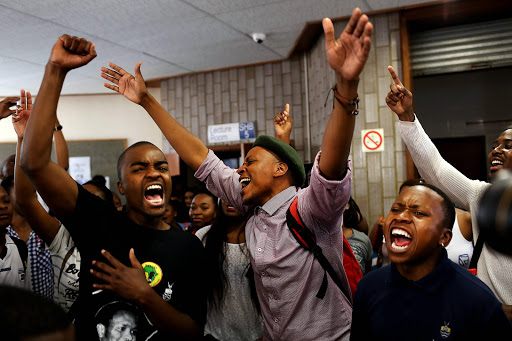 The African National Congress Youth League (ANCYL) in the Western Cape on Sunday called on tertiary institutions to turn to the league if they were in need of protection on campuses.

“If management cannot protect the students, they must call on us,” ANCYL co-ordinator in the Dullah Omar region and regional task team member Unathi Tshotwana said.

“The ANCYL is the champion of education and we are also going to be the champions of security.”

Tshotwana, accompanied by members of the ANCYL and the SA Students’ Congress (Sasco), addressed media after a meeting between the league and student leadership.

He said students should practice their right to register and study at places of higher learning.

The Pan Africanist Students’ Movement of Azania (Pasma) and the Economic Freedom Fighters, among others, should refrain from disrupting the process. If not, the ANCYL and its allies would march on disruptive elements.

“We are going to protect institutions of higher learning,” he said.

However, not every campus would enjoy the ANCYL’s protection.

The league announced it would march on the Cape Peninsula University of Technology (CPUT) campus in Wellington in protest against alleged discrimination against black students and lecturers.

According to the league, students were being discriminated against at the Wellington campus by being forced to learn in Afrikaans. Their results would be far worse than white students as Afrikaans was not their mother tongue.

Tshotwana said more than 70 CPUT students had been denied access to their exams and were now expected to travel far distances to do so.