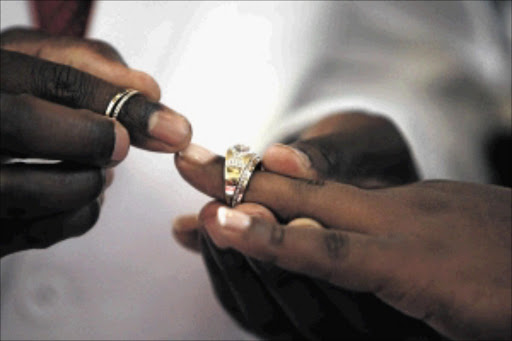 PUT A RING ON IT: If a first marriage is a civil contract, a court must ratify the lobolo union Photo: Esa Alexander

Diplomats and activists on Wednesday welcomed news that Zimbabwe's highest court had banned marriage for all under 18s in a landmark ruling many hope will be followed by other countries in Africa.

The new minimum age applies to both males and females.

The ruling was delivered Wednesday morning unanimously by all nine judges in Zimbabwe's Constitutional Court - but it took a year for it to be delivered.

It's likely to be seen as a significant slap in the face to Zimbabwe's prosecutor general Johannes Tomana who only last year claimed some girls above the age of 12 "may want to start out in life early" and should be allowed to marry if they had "no alternative".

The case was brought by legal watchdog Veritas, and argued by former finance minister Tendai Biti, who is a lawyer. They wanted existing laws which either did not set a minimum age for marriage or allowed it from the age of 16 to be declared unconstitutional in the light of Zimbabwe's new charter, which was adopted at a referendum in 2013. The Constitutional Court did just that.

Child marriage is a significant problem in Zimbabwe, fuelled, say activists, by some popular Apostolic Christian sects which allow marriage of a much younger girl to an older man. Rights groups say about 21 percent of Zimbabwe’s children, mostly girls, are married before the age of 18.

Said Veritas in a statement, "This progressive decision is a mark that the Zimbabwe Constitutional Court is building up a body of constitutional jurisprudence which will also be quoted in other jurisdictions and should assist the Africa-wide campaign against child marriage."

The Harare-based Research and Advocacy Unit tweeted: "@veritaszim congrats on the ground breaking judgement we are excited to see the law implemented! #ChildMarriages".

However, marriages contracted by under-age persons before this ruling will not be declared invalid.

"The court is cognisant of the immense disruption that a retrospective declaration of invalidity may cause on the persons who conducted themselves on the basis that the legislation was valid," the ruling reads.