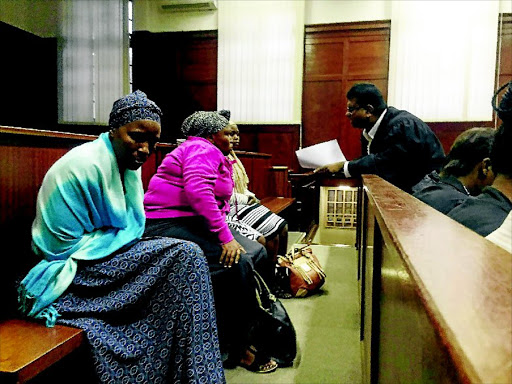 ritual killers: Fundiswa Faku, Lindelwa Jalubane, Nokubonga Jalubane and Minenhle Jalubane in court where they were expected to be sentenced but the matter was instead postponed to next year Photo: Phumlani Thabethe

Four relatives accused of killing their 14-year-old niece by pulling her intestines out through her vagina will spend Christmas at home.

This week, the Durban High Court was due to hand down sentence but lawyers representing the accused requested that the court adjourn the matter to next month.

The lawyers requested that correctional officers be dispatched to the homes of the accused to assess whether the area could be monitored in case the accused were given suspended sentences.

In requesting the adjournment, lawyer Pregasen Marimuthu submitted that the correctional officers' report was crucial to ensure that the accused are accorded a fair trial.

Marimuthu also told the court that after both the reports from the social workers and the correctional officers had been submitted to the court, he would cross-examine the officials responsible for crafting them. The four women stand accused of killing Sinethemba Dlamini on allegations that she was a devil worshipper.

The accused are all out on R5000 bail. They will be back in court on January 21 next year.