Two kids a crowd for many Chinese families 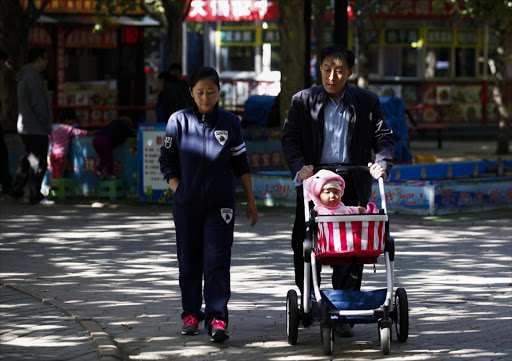 Chinese citizens greeted the announcement of a “two-child” policy warily Friday, as high costs, career aspirations and rising urbanisation in an increasingly wealthy society mute expectations of a baby boom.

But Thursday’s change may have been too little, too late, as many young Chinese see more costs than benefits in having a second child.

A survey on Chinese media site Sina with over 160,000 respondents found that less than 29% would have a second child, and social media users seemed to meet Thursday’s announcement with a collective shrug.  By Friday evening the subject had dropped out of the top 10 topics on popular micro-blog site Sina Weibo.

Users questioned whether one was truly the loneliest number and said that even if they wanted a child, they could not afford one.

“The country doesn’t give any financial support,” said one post among many that lamented the costs of having two children.  “Apartments are so expensive, now. Who can afford to give birth?“ Making more children clearly is not the solution to China’s economic problems, another comment said, adding that instead “maybe we should be working hard to make more money“.

The policy is said to have prevented an estimated 400 million births in the world’s most populous country, where 1.37 billion people live today.

Most families were restricted to only one offspring, but various exemptions applied, and violators who could afford to pay the fines were able to have a second child, or even more.Renowned film director Zhang Yimou paid a $1.2 million fine for having three extra children.

The plan was supposed to save China from a looming population explosion, but now it contributes to a greying of society that will exacerbate labour shortages as the world’s second-largest economy fights to maintain growth.

Under the new policy 90 million couples will be have the right to a second child, family planning officials said Friday, without specifying how many were newly eligible.

But 60% were over 35, they said, and many will already have been qualified under older policies that permitted extra offspring for minorities, rural residents, and those who were only children themselves — many of them city-dwellers under 30.

Chinese media Friday portrayed the decision to loosen the policy as a victory for both the economy and the people, who have long expressed anger at the controversial policy and its myriad abuses.  “The new Five-year Plan should be regarded as a triumph of the people’s will, as many policies have echoed long-term appeals,” the Global Times, a paper close to the government, wrote following the announcement.

“Push up the economy, bring up the population,” one read.

A previous rule change in 2013 allowed couples to have a second baby if just one of them was a single child, rather than both.  But it met a “lukewarm response,” said Joan Kaufman, director of the Columbia Global Centers East Asia and a long-time expert on China’s population planning.

At the time, the government “expected a big surge in births, people registering and having a second child, but they didn’t get that,” she said.

While once there may have been pent up demand for more children, experts say that as the country has grown wealthier, couples have increasingly delayed having even one child as they devote more time to other goals, such as building their careers.

“The policy really only affects the cities,” said Leta Hong Fincher, author of “Leftover Women,” a book about the challenges faced by China’s single women.

“Urban couples nowadays complain about how expensive life in the city is,” she said. “There are couples now who don’t even want one child.”