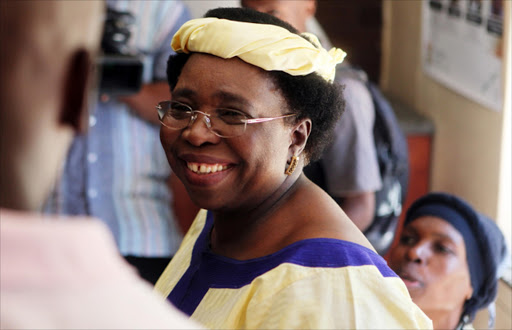 Stood up for Zuma: Nkosazana Dlamini-Zuma

Women in South Africa are well represented in government leadership positions‚ but in the business world‚ they lag behind their counterparts on the continent.

This was one of the points made by Chairperson of the African Union Commission Nkosazana Dlamini-Zuma when she delivered the second Annual Stan Nkosi Memorial Lecture on Wednesday.

In a wide-ranging speech delivered at the Grace Bible Church in Pimville‚ Soweto‚ Dlamini-Zuma praised Stan Nkosi‚ after whom the lecture series was named.

A member of the South African Student Organisation and later of the ANC‚ as well as a trade unionist and later a businessman‚ Nkosi was lauded by Dlamini-Zuma for his selfless devotion to the struggle against apartheid as well as his work after 1994.

“Stan belongs to the generation‚ like those before him‚ who defined their mission as the liberation of South Africa and the continent from colonialism‚ Apartheid‚ and all forms of discrimination. Those generations‚ which include many heroes and heroines‚ have fulfilled their mandate‚” she said.

The task of the new generation‚ she said‚ was to “contribute to the transformation of our continent so that it may be a prosperous‚ integrated‚ peaceful continent driven by its citizens and playing a dynamic role in the world”.

She set out the goals of the AU’s 50-year vision for Africa‚ Agenda 2063: The Africa We Want. Defined by the AU as “a global strategy to optimise use of Africa’s resources for the benefit of all Africans”‚ Dlamini-Zuma emphasised the importance of education and skills development‚ especially in fields such as science‚ technology. “We thus talk about the need for an African skills revolution‚ because only when there is a skills revolution can we hope for this prosperous continent and inclusive economic growth‚ peace and integration

She deplored “a world where the 80 richest individuals in the world have as much wealth as the poorest 3.5 billion citizens”‚ and where illicit outflows of money from Africa amounted to 854 billion dollars between 1970 and 2004.

Towards the close of her talk she said: “In the continent there are very few countries that have managed to equalize the salaries for the same work and same time. Women are earning 10-30% less than men for the same work. That cannot be what non-sexist South Africa and continent means.”