ANC is selling our country to China 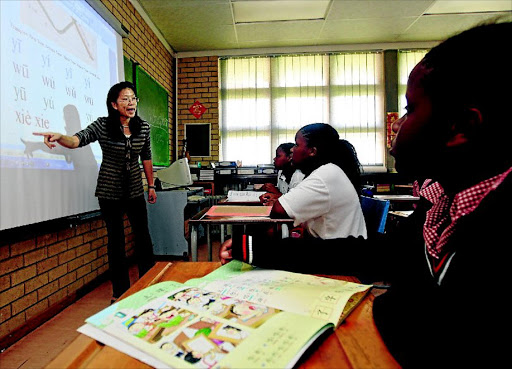 LESSON OR POISON?: Mandarin teacher Angela Liu in class with some of her pupils. The subject will be taught in public schools next year, a decision that has been criticised in many quarters. Photo: KATHERINE MUICK-MERE

A silent protest is brewing in South Africa. It is a subdued anxiety against what most South Africans view as a manifestation of an unwelcome encroachment by China.

Not long ago the department of basic education announced that, as of next year, South African children will learn Mandarin in public schools.

This announcement was preceded by news of the ANC dispatching delegations to learn from the Communist Party of China.

It is even alleged that China has committed to bankrolling the construction of a political school for the ANC in South Africa.

All this suggests that the Chinese are not imposing themselves on us; they are being invited to take over our country by the ruling party.

We must therefore seek to understand what has gone wrong in the mind of the ANC, that the party voluntarily invites foreigners not only to indoctrinate our children, but indirectly to run our country.

Two things seem terribly wrong with the ANC today. Firstly, the party is experiencing a serious confidence crisis and, secondly, it has grossly misread developments in the international arena.

It is not easy for undiscerning observers to detect the ANC's confidence crisis because the party projects a dead lion's beard to the West, while crawling to China with its tail between its legs.

This syndrome is typical of people battling with the mental effects of colonialism.

On the one hand, they are bent on proving to the world that they are courageous enough to tell their former colonisers to go to hell, while at the same time they are unsure if they can stand without the support of another big brother.

In other words, the ANC is uncertain if South Africa can withstand the consequences of castigating the West without the protection of a neocoloniser - China.

This was the logic of small, timid states during the Cold War. They insulted the East if they believed that they enjoyed the full protection of the West, and vice versa.

Thus the ANC is trapped in a Cold War mentality that is irrelevant to a new world, an arena where international relations have become too complex for anachronistic leaders with a simple mind.

Thabo Mbeki did appreciate how a country like South Africa can use her strategic position to advance an African agenda that is not underwritten by a big country outside the African continent.

He did not say "I am an African" because of China, the US, Russia or India. He accommodated in his sophisticated conception of an African only those Europeans who settled permanently among us.

Such Euro-Africans should not be viewed as a gate through which we Africans enter contemporary Europe; they are as African as Afro-Americans are American.

The springbok is a symbol of our national rugby team not out of an ill-intention to cover a white body with the skin of an African animal; white South Africans are truly African.

The ANC of today has conjured up the illusion that black people are under siege by white Europeans, and therefore that we must sell our independence to the Chinese for protection.

This is fuelled by a corrupt element in the party, a clique that has convinced itself that corruption scandals in the media are planted by whites who wish to delegitimise a black government.

Black people who are conscious must reject the ANC's pilgrimage to China, not because the Chinese are necessarily bad people, but simply because we do not need them to be fully African.

There is room to collaborate with China on strategic issues, but let them keep their language to themselves. We Africans have our own languages to develop.

Essentially, the ANC is selling our identity to the Chinese, while they don't sell theirs to us.

This brings us to the ANC's misreading of international trends. The party might benefit from reading Deng Xiaoping and theTransformation of China by Ezra Vogel.

This book (and others) makes it clear that those who believe that China is making economic progress because of some Chinese secret are simply ignorant.

The country's progress began the day it looked West. Troubled by centuries of economic backwardness, its leaders began to read Adam Smith, who taught them capitalism.

Since Deng set out to implement his turnaround strategy, China has been sending students to the best American universities to learn, then come back and implement Western ideas.

Since the ANC is unaware of this, it has been visiting the wrong place for lessons - China. If indeed the party wants to learn, the best place to visit is America, where the Chinese went for their lessons.

Even if the ANC chooses to go to America, it must sell only Luthuli House, not our country, to foreigners. We are and can be fully African without a foreign big brother.