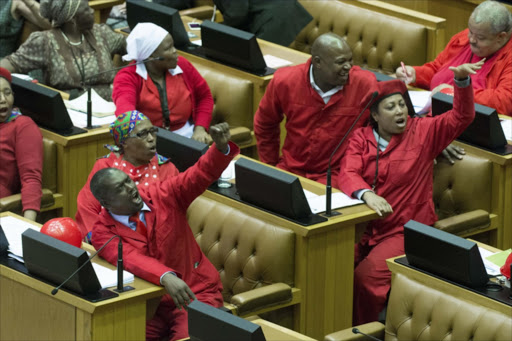 International businesswoman and former model Reeva Foreman has joined the debate on the national anthem‚ accusing the Economic Freedom Fighters party (EFF) of “totally missing the plot” with its call for the Afrikaans verse to be dropped.

In a letter to the media‚ Foreman charged that the EFF was suggesting throwing away evidence of the “greatest humanitarian gesture mankind has seen” – a gesture that made every South African‚ irrespective of colour or race‚ “walk proud and tall”.

“You want to destroy evidence of the world’s greatest Humanitarian Activist — our very own beloved Madiba- Nelson Mandela… who with this very verse‚ and other gestures‚ helped to prevent a civil war — to prevent the loss of life – to prevent blood shed....yes‚ the horrific bloodshed‚ that you see around us in the world today‚” Foreman wrote.

She added: “Inclusion of this verse was not one of a cow-towing to the previous abhorrent apartheid regime. On the contrary it was a gesture of the most enormous magnitude in its generosity and forgiveness‚ emanating from those in the position of the greater power‚ (which must always be the case in conflict resolution)‚ holding out not only the proverbial olive branch‚ but saying in spite of the past‚ we can forgive we through our great ethos of Ubuntu. We can be inclusive and respect your identity‚ allow you to retain your dignity and welcome you into our nation!

“The mark of a true democracy is how a country treats it minorities! Our SA credo ‘Unity in Diversity’ is a lesson the EFF and the world could indeed take heed.”