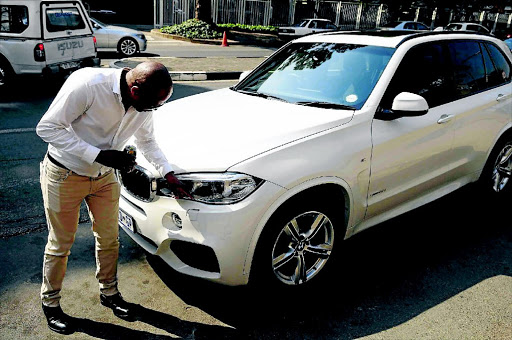 FEELS CHEATED: Zanovuyo Malusi says he was sold a supposedly new BMW car, in the picture, which he believes must have been involved in an accident prior to being sold to him as a new car Photo: Thulani Mbele

Some Gauteng BMW dealerships are accused of selling substandard cars and refusing to exchange them when clients find defects.

Zanovuyo Malusi is one of three consumers who have alleged that certain BMW dealerships sold them defective cars.

Malusi, 41, of North Riding in Johannesburg, bought a new white BMW X5 worth R1.1-million from Joburg City Auto two weeks after it was launched in March last year.

He said for a car worth over one million rand, no one expects its axles to have rusted on all four wheels or for it to have different shades of paint and fog lights that are skew.

After driving it for three months, Malusi realised the front headlight washer was broken and, on closer inspection, he noticed that its front bumper had also been resprayed. He immediately suspected that the car was involved in an accident.

"Whoever was commissioned to repaint it did a shoddy job as they used a cream paint instead of white," Malusi said.

He took up the matter with the dealer, who denied it had been involved in an accident or that its front bumper had been resprayed.

For a second opinion on the car's condition Malusi took it to Dekra, a global safety, testing and advisory firm, and they found more defects he had not been aware of.

They found that the front lower grille cover was missing, the front tyres were uneven and the right jack-up point part was missing.

Though BMW later admitted there was a discrepancy on the condition of his car, it only offered to respray it and repair the small scratches. Malusi said BMW told him that his reason for an exchange lacked technical merit. It did not tell him what actually happened to the car to necessitate the fixing or respraying.

Malusi pays an instalment of R15725 for a car he no longer enjoys. Two weeks ago he came back home without the car's tow hook cover as it came off while he was driving, he said.

"If this car was not involved in an accident, then I'm tempted to believe that BMW brought a defective or substandard car into South Africa as this model is assembled in Germany," Malusi said.

Group communications manager at BMW, Edward Makwana said they were aware of Malusi's complaint and denied the car was previously involved in an accident.

He said the car was assessed by a technician at the same dealership where it was bought, but Malusi was not satisfied with their finding. Makwana added that the head office also found nothing wrong with the car.

"To resolve this problem and as a gesture of goodwill, we offered to spray paint the bumper of the vehicle and repair the small scratches at our cost."

Makwana said Malusi also approached the Motor Industry Ombudsman (MIO) in April and it had not received a final position from the MIO declaring otherwise.