First for women in 'musangwe' 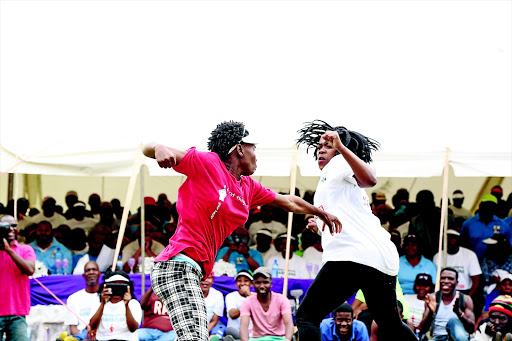 NEAR MISS: Dikeledi Mbedzi, wearing a white T-shirt, and Matshimbidzane Fulufhelo take each other on during the traditional 'musangwe' tournament hosted at Nandoni Dam on Friday Photo: Ndivhuwo Mukwevho

Women have finally been allowed to participate in musangwe (bare-knuckle fighting) tournaments in Venda, Limpopo.

Musangwe is a traditional Venda fist-fighting game where only males participate.

Another female boxer who participated was Fulufhelo Matshimbidzile, 22, who said: "Musangwe should be made a professional sport because even though it seems violent, it is very entertaining."

The musangwe tournament took place on Friday at Nandoni Dam outside Thohoyandou to celebrate Heritage Month.

The tournament took place after a 20km fun walk which was led by Venda King Toni Mphephu Ramabulana.

"As we celebrate Heritage Month we must embrace our cultures as Africans.

"I feel very honoured to see young people participating in our traditional game of musangwe, it is a major step in preserving our rich culture," said Mphephu Ramabulana.

The tournament was also attended by Chief Fabric Zombie from the Democratic Republic of Congo.

"I came here to visit the Venda people as you all know that Vhavenda originate from the Democratic Republic of Congo. We have a rich history between us and we will continue to be part of the heritage celebrations here in Venda," Zombie said.

Deputy Minister of Cooperative Governance and Traditional Affairs Obed Bapela said the department had requested, through Sports Minister Fikile Mbalula, that musangwe be recognised as a professional sport. "As a department we have since asked the minister of sports, Fikile Mbalula, to include musangwe as a professional game because it has a rich history for us as Africans."

The festival was attended by more than 10000 people.