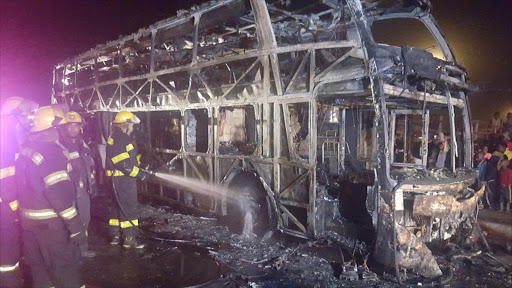 At least two people have died and several others injured after an InterCape bus was petrol bombed on the N2 highway.

The petrol bomb was thrown while the Intercape bus was travelling along Onverwacht Road in Strand.

The bus was packed with long-distance travellers who were heading to East London.

32 people have sustained burn wounds and others injured after trying to jump from the burning double decker bus, another passenger was rushed to Tygerberg hospital.

Eye witnesses say 3 men appeared from the informal settlements of Nkanini and threw  petrol bombs at the bus.

"As I passed the robots I thought it was two stones thrown in front of me then the fire started I tried to speed and run away but the fire was getting big so I just opened the doors for the passengers to come out" said the shocked bus driver.

The driver believes that the people that petrol bombed the bus are striking Intercape workers. The driver also recalled another incident of violence.

He said that while driving in Grabouw to Mtata ,Eastern Cape, last month on the 15th he narrowly avoided getting shot, allegedly by his striking colleagues.

It is alleged that the bus company retrenched workers and these workers want all the drivers to down tools to help reinstate them.

According to the driver, the people who threw the petrol bombs knew the route the bus would use as they are also drivers that have used that route before.

He also said that the striking workers go to working drivers' homes to intimidate them.

“Metro Rescue Services as well as ER24 are on the scene and the road has been closed. There’s no indication as to the reason of the attack but it doesn’t appear to be the result of protest action; there are no protests anywhere near the scene. It just too horrible.”

There were also children inside the bus.

Maruba Benzi, a passenger, said  he is thankful to God that he survived as he thought it was the end of him.