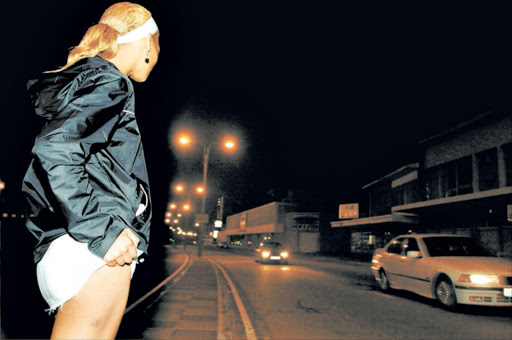 In the heart of Bulawayo's central business district, a group of young women lurk below the giant jacaranda trees that shut out the street lights, daubing their faces with makeup and adjusting their short skirts.

It is just 7pm, businesses have closed, and what remains of nightlife in Zimbabwe's second city begins to stir, including prostitution - illegal, risky because of the high rates of HIV/Aids, but still a draw for young women facing high unemployment.

Susan, in her early 20s, is selling sex on the street and in nearby bars. Declining to give her full name, she says she doesn't use a condom, despite the risk of infection, because she earns more from unprotected sex.

"Every girl I know here is doing it, no need to lie about it," she said.

Susan is one of thousands of young women turning to sex work in a country where the economy is in tatters, hit by unemployment, drought and controversial land reforms.

The risks are immense: one in five sex workers are HIV-positive, the Center for Sexual Health and HIV/AIDS Research (CeSHHAR) said earlier this month.

Few sex workers get the treatment they need because they are stigmatised in health centres, undermining efforts to reduce HIV prevalence, according to the center, a Zimbabwean charity providing legal and reproductive health services.

The southern African country has one of the world's largest HIV epidemics, with almost 17% of 15- to 49-year-olds living with the disease, according to UNAIDS.

Some 1.6 million out of 13 million Zimbabweans are HIV positive, the majority of them women, it said.

HIV campaigners have taken their safe sex messages to hotspots like long distance trucker stopovers and small semi-urban centres, but change has yet to take root in city centres where young women like Susan operate.

"While there is a national sex worker programme . continuing high rates of HIV transmission among sex workers suggest that its implementation has not been sufficiently successful."

Almost half the 52000 sex workers who have visited CeSHHAR's clinics since 2009 required treatment for a sexually transmitted disease.

One in five of the 52000 started selling their bodies as teenagers, it said.

Zinhle, who describes herself as a "veteran prostitute", solicits for business in a working class neighbourhood tavern.

"I tell my clients I am HIV positive," she said, declining to give her full name. "It's up to them whether they want to use condoms or not. I don't care." Experts have highlighted pubs and bars as places where people engage in risky sex after drinking alcohol - which is also linked to poor adherence to HIV drugs.

More must be done to ensure that sex workers, gay men, injecting drug users, prisoners and transgender women receive HIV prevention, testing and treatment if the world is to end the epidemic, experts say.

Men who have sex with men are also excluded from services in Zimbabwe, Bartos said, because of cultural taboos and the criminalisation of homosexuality.

Yet the attitude of many young people in the city to sex and Aids remains one of complacency.

"There's no one who doesn't know there is Aids," said Thomas Ndlovu, who pays for sex but declined to say whether he uses condoms. "We all have to die some time." - Thomson Reuters Foundation