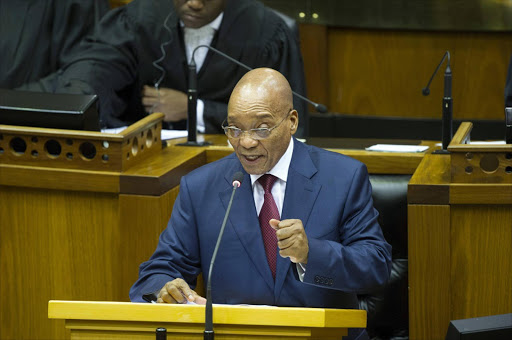 South African economic growth “is expected to increase steadily to at least 3% over the next three years‚ because we expect the electricity constraint‚ which is our major obstacle‚ to ease”‚ President Jacob Zuma said on Tuesday.

The president was briefing the media on progress made since the adoption the Medium Term Strategic Framework‚ based on the National Development Plan‚ as outlined in his State of the Nation Address in February.

“Our estimate is that electricity shortages are currently costing the economy close to one percentage point in economic growth.

“Since the inception of the five-point plan in December 2014‚ substantial progress has been made in resolving the energy challenge.

“The operations and maintenance practices at Eskom continue to improve‚ to ensure that the power plants are appropriately maintained and provide electricity within their capacity.

“Eskom has signed short-term power purchase agreements that bring additional supply of electricity‚ to cater for the shortfall due to maintenance and to match demand during peak periods. A further 800 megawatts will be added to the grid through co-generation.

“A saving of 450 megawatts has been realised through the energy efficiency programmes.”

Speaking about employment‚ the president said‚ “The threat of job losses in the mining and steel sectors is of serious concern to government as it would have a negative impact on many families‚ communities and the economy.

“Stakeholders identified a number of areas to save jobs and to find alternatives to job losses. A task team was established and mandated to develop detailed proposals. The task team will report back to the principals this week.”

The president said the Presidential Business Working Group had last Friday mandated government and the Chamber of Mines to seek an amicable solution outside of the courts‚ to the notion of “once empowered‚ always empowered” notion in the Mining Charter.

“We look forward to a positive outcome.”

Significant investments had also been made in key manufacturing sectors such as the auto sector‚ agro-processing and electronics. “A few examples include R5-billion by Mercedes Benz‚ R3-billion by Ford‚ R4-billion by Unilever in four plants over the past for years and R228-million from Samsung.

“We have also experienced a strong turnaround in manufacturing exports. Auto exports amounted to R115-billion in 2014 which is 12.7% of total exports in the country.

“Government’s intervention aimed at arresting the decline of the clothing‚ textiles‚ leather and footwear sector resulted in the retention of 68‚0000 jobs in the sector.

“By the end of March this year‚ a total of R3.7-billion rand in support of the private sector‚ had been approved since the inception of the Clothing and Textile Competitive Programme in 2010‚” Zuma said.

Since 2009‚ government‚ through the Department of Trade and Industry had also supported agro-processing industries‚ to the value of R1.2-billion rand through various schemes.

“There is a need to further scale up industrial development in the country. In this regard‚ among interventions‚ we have introduced the Black Industrialists Programme which is designed to transform the manufacturing sector and unlock the potential of black entrepreneurs.”

With regards to infrastructure development‚ government and public agencies had invested just more than R1-trillion in infrastructure‚ between 2009 and 2014.

“The investments are in energy‚ road‚ rail‚ ports‚ public transport‚ bulk water and sanitation‚ hospitals‚ basic and higher education infrastructure and innovative projects such as the Square Kilometre Array and Meerkat.

“The priority interventions to unlock the potential of SMMEs‚ cooperatives and township and rural enterprises are continuing. These include working towards the implementation of the 30% set-aside policy to support SMMEs and cooperatives.

“The SMMEs will be supported with increased access to markets and finance. On the cards‚ is also a concerted effort to reduce the red tape for SMMEs which will include a review of existing small business legislation.”

“On agriculture‚ much progress has been made in the development of Agri-Parks‚ with 43 of the 44 sites having been identified. One Agri-Park is ready to be launched in North West. We also continue to implement other key initiatives of the Agricultural Policy Action Plan to‚ support growth and employment in agriculture and agro-processing.

“The plan includes increasing support for existing smallholder farmers and exploring ways to substantially expand the number of agricultural producers.

“Government has identified water as a critical resource for economic development and work continues to implement the five point plan for water and sanitation. A review of both the Water Services and National Water Acts will be undertaken‚” he said.