Afri-berry: Meet the duo behind the skin and hair care product line 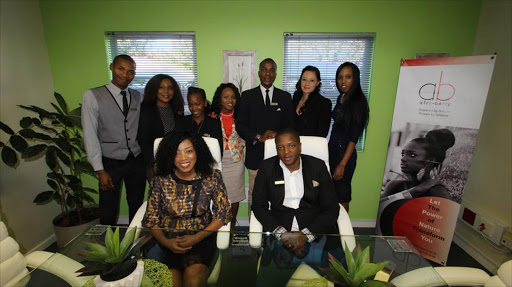 After an accident left her with over a 150 stitches on her face, Relebohile Moeng (34) started searching for something that would help with the scarring.

Countless consultations and expensive medications later she was told the only way to minimise the scarring was through plastic surgery.

Moeng, a GIBS graduate who holds a Master’s degree in Business Management, looked for more affordable solutions and it was Argan oil that yielded results.

Following her retrenchment from work, Moeng and her then un-employed husband Fabian who holds a Cost and Accounting degree decided to do some research into skin products, this led to the launch of their company in 2011.

Afri-berry is a naturally-based skin and hair care products line. The products include Coconut oil, Morraccan Oil, raw Shea butter and Jamaican Black Castor oil which works wonders for your hair. The oil is cold pressed, which means no chemicals or solvents are used to extract the natural oils from the source.

Cold pressing is the oldest form of extraction and the slowest, but he benefits are numerous.

With an initial R10 000 capital, they were able rent a small office space and within 6 months employ 15 people.

Relebohile is the head of Operations and the Creative of Director of the business and her husband is the CEO.

The couple explained that they have extended their distribution to China with the help of the Department of Trade and Industry.

‘If at first you don’t succeed, try and try again’, that’s the approach the couple took with the trade department.

Moeng recalls how they preserved and gave everybody samples to try out, even the security guards, and within two months the DTI was giving them calls. From 2012 the company and the DTI have had a relationship.

“The government is willing to help; they are looking for people with ideas that are working. It’s just a matter of knocking on their doors, there is help there. They can even help with the testing of products. It’s just about going out there and seeking the necessary help and advice,” said Relebohile Moeng, although she and her husband state that waiting for government funding shouldn’t be your only recourse.

The SABS approved Afri-Berry has been going for 5 years now, with their products in all Sweet Penny and Head to Toe stores. Afri-Berry is also found in 20 beauty spa’s around Gauteng.

The couple also revealed that they are in talks with grocer Pick ‘n Pay to stock their product in their stores.

“There is no formula to any kind of success. The only best thing I would say is that if you follow your passion, it has a way of leading you where you need to be. With our background as South Africans, we tend to look at the past more than anything. And the encouragement I would give is that the past for us doesn’t matter, where you come from, who you are, where you lived is immaterial, what’s important is the future. What are you doing about now, the self pity party doesn’t work,” said Fabian Moeng.

The couple are both pastors and have two children both boys, aged 9 and 7. They relax by hanging out together as a family. When asked why they called their business Afri-Berry, they replied that the scientific term for berry is a pulp that has a singular ovary and ovaries produce. So in short it means Africa can produce.