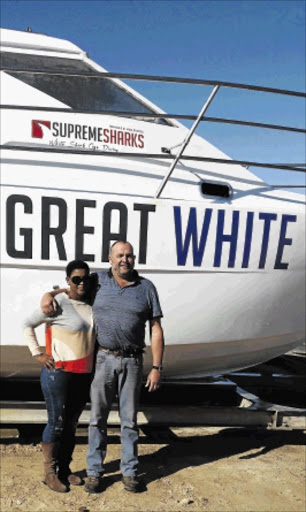 A self-confessed white Afrikaner racist has opened his home to the two daughters of a deceased black ANC woman activist.

Gansbaai businessman Ferdi Kritzinger admits he has always been a racist.

But a business partnership with a black woman, which he ventured into for the purpose of BEE fronting, changed his life.

"I desperately needed a black partner and an attorney friend of mine recommended I contact businesswoman Yvonne Lungcuzo.

"I was very conservative, a gentle racist, and in the beginning I did not trust her. But within three months I realised this was an awesome woman," That was in 2011.

Together Kritzinger and Lungcuzo, who originally came from Cala in the Eastern Cape, started Kritcon Construction, a full-service construction management and general contracting firm.

Kritzinger later joined forces with Lungcuzo, who was the first woman to be awarded one of eight permits to run a shark cage diving company, Supreme Sharks, at Kleinbaai.

What Kritzinger did not foresee was that his partnership with the larger-than-life ANC stalwart would bring another responsibility.

One night in 2012, Kritzinger got a call from his business partner.

"Yvonne had previously asked me a couple of times to accompany her to the beach to pray," Kritzinger said.

"That night she asked whether I would go to Macassar beach [on the False Bay coast] with her. She walked into the water and prayed.

"When she came out of the water she hugged me and asked me whether I would look after her children if something happened to her."

Barely a few months after their stroll on the beach Lungcuzo, who had not been well, died.

Honouring her wishes, the Kritzingers took her two children, Nozuko, the eldest, who was a law student at the time, and Zolitha, a psychology student at the University of the Western Cape, into their home for six months.

After completing her BCom Law and LLB degrees at the Nelson Mandela University in Port Elizabeth, as well as a national diploma in management, Nozuko joined Kritcon construction in 2013.

She also inherited the shark cage diving permit from her mother.

"I did not want to go into business with a white person but Ferdi explained to me how my mom had changed his life. We ended up staying with them.

"Many of mom's companies were financially in trouble. I only had Ferdi whom I trusted. This is my family now."

A year before her death, Sunday Times wrote about how Yvonne worked her way up from living in a shack to a seat in boardrooms.

She became an activist for an anti-eviction campaign and was involved in community projects and local civic politics.

She opened her own car-hire company, Ibhongo, and was nominated for the 2008 Nedbank Business Achievement Award.

She was also a trustee of the South African Ubuntu Foundation & Amy Biehl Foundation Trusts.

Nozuko plans to continue her mother's philanthropist mission. She has completed her attorney's articles and wants to join an institution like Legal Aid to represent disadvantaged and impoverished people.