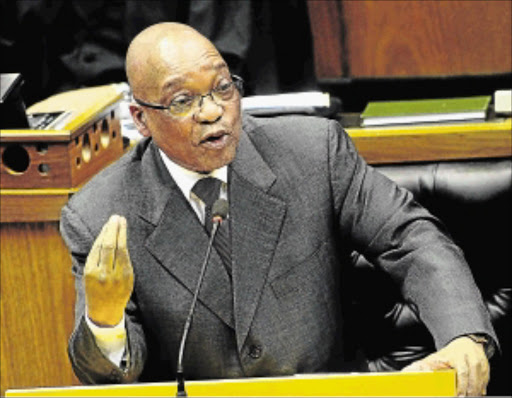 EYE ON THE FUTURE: The writer says President Jacob Zuma is to blame for the leadership crises in law-enforcement agencies Photo: SIYABULELA DUDA/ GCIS

The Presidency and CEOs of mining companies‚ representatives of civil society and national office bearers of labour unions had held more than 15 consultative meetings and there was overwhelming support for the Phakisa process‚ President Jacob Zuma said yesterday.

The Phakisa process is an initiative aimed at fast-tracking the delivery of the priorities outlined in the National Development Plan‚ which is South Africa’s 30-year framework for growing the economy while tackling unemployment‚ poverty and inequality.

In the State of the Nation Address in February this year‚ the president announced that a Mining Phakisa programme would be implemented by government and the mining sector later this year.

The Phakisa programme is modelled around the government of Malaysia’s Big Fast Results methodology‚ which that country used to address their national key priority areas such as‚ poverty‚ crime and unemployment.

“We are determined‚ together with our stakeholders‚ to steer the mining industry towards increased investment‚ growth and transformation whilst being mindful of the social‚ environmental and health impacts on our people in mining towns and labour-sending areas‚” the president said.

“We continuously strive to improve and enhance our governance processes and to this end have undertaken two evaluation exercises within government‚” said Zuma.

The first exercise takes a closer look at improving the relevance and effectiveness of the environmental governance legislation in mining and its implementation‚ whilst the second evaluation being considered‚ focuses on evaluating the implementation of the Mining Charter in order to strengthen the realisation of its objectives.