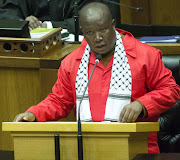 The EFF in Limpopo made damning allegations about the removal of Rudolph Phala as MEC for treasury.

Phala was the only MEC sacked during premier Stanley Mathabatha's cabinet reshuffle last month and was replaced with Rob Tooley.

He refused, among others, to:

lbuy two pieces of land to the value of R400-million in Greater Tubatse and Tzaneen municipalities from friends of the premier without evaluation;

lappoint contractors who did not meet requirements for RDP houses, resulting in the province returning R560-million to National Treasury in the 2014/15 financial years;

lbuy 700 Mercedes-Benz ML series to the value of more than R600-million for traditional leadership as part of the ANC's 2016 local government electioneering.

"These developments are very worrying as they are paving a way for more corruption and looting of state resources," Buthane said.

He said the EFF had also noted that Tooley had already sent a memorandum to the National Treasury requesting the approval of the procurement of the luxury vehicles without the contribution of the traditional leadership as required.

"We will never allow our respected traditional leaders to be used to woo their poor communities and treat them as voting cattle by simply buying the leaders cars while failing to provide these masses with basic services."

Buthane said EFF would approach the public protector and the auditor-general to investigate.

Mathabatha's spokesman Kenny Mathivha said the reshuffling was done after thorough evaluation of the executive.

"The issue of vehicles was raised by chiefs themselves," he said.

Mathivha said they knew nothing about the land purchase.