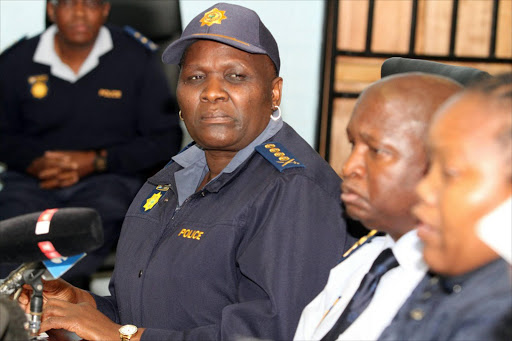 National Commissioner General Riah Phiyega addressing the media at the Alexandra Police station after a constable shot and killed his wife at the police station after she came to report a domestic violence case. Picture Credit: Bafana Mahlangu.

UPDATE: The South African Police Service (SAPS) have released the names of the four victims who were shot and killed by a police constable at the Alexandra Police Station.

It appears that the police officer followed his wife and relatives who went to report him for domestic violence at the police station around 6pm and opened fire at them on his arrival.

He is said to be have been working as a 'court orderly' at the Alexandra Magistrate Court and was suspended as he was undergoing a domestic violence case at the Wynberg Court.

During the shooting incident, another police officer who tried to intervene was shot and killed by the constable.

He then fled to his house where people called the police Tactical Response Team (TRT) who went to apprehend him but a shootout occured and he was also killed.

Gauteng police commissioner Lt-Gen Lesetja Mothiba expressed his shock and said that there will be a thorough investigation which will involve the IPID.

He also said that police officers who were present during the shootout received counselling on the scene.

National Police Commissioner Riah Phiyega said: "As a society we need to put more attention to dealing with issues of domestic violence."

People took to social media to express their shock:

This #AlexShooting at a police station its just shocking,

Alex is really becoming a Sodom and Gomorrah #AlexShooting