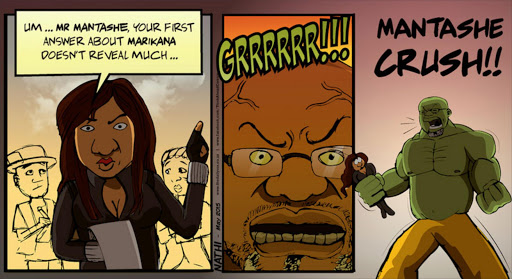 ANC secretary general Gwede Mantashe lost his cool this weekend when he lashed out at journalist Ranjeni Munusamy at a press briefing following an ANC national executive committee meeting.

Munusamy, who has a messy backstory with Zuma and the ANC had pressed Mantashe on whether president Jacob Zuma had discussed the Marikana report with the committee, and the sec-gen snapped.

Mantashe went on to say that journalists who “project [themselves] as hostile” to the ANC would be refused interviews.

“Continue with your hostile stance. I am sharing with you how we deal with you as journalists, when you are reckless when you write stories, we won’t give you interviews,” he said.

What exactly prompted the tirade is anyone’s guess.

EWN’s Stephen Grootes suggested that this bullying is “simply a symptom of the ANC’s own frustrations, nothing more, and nothing less” and that it is tied to the party's troubles in the Eastern Cape and KwaZulu-Natal.

Whatever it is, Mantashe needs to reign in his temper because it isn’t reflecting well on him or the ruling party.