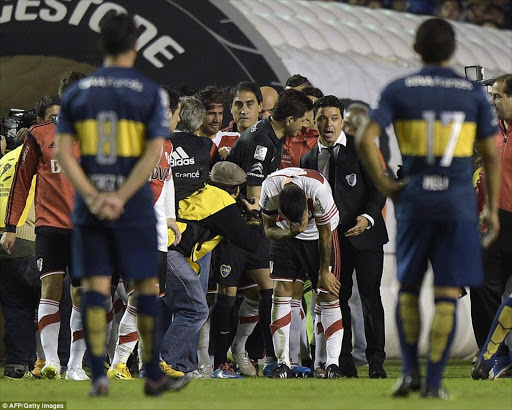 The attack appeared to happen in the tunnel as the River players made their way out for the second half. Picture Credit: AFP/Getty Images

Four River Plate players were taken to hospital after they were sprayed with an irritant by fans of bitter rivals Boca Juniors on Thursday, causing their Libertadores Cup derby to be abandoned at halftime.

The last 16 second leg tie between the Buenos Aires clubs at Boca's Bombonera stadium was deadlocked at 0-0 when the incident occurred in the tunnel as the players came out for the second half.

TV pictures showed Leonardo Ponzio and Leonel Vangioni rubbing their eyes and other players pouring water over their faces to wash away the substance, which had an effect consistent with a lachrymatory agent such as pepper spray.

They, along with team mates Matias Kranevitter and Ramires Funes Mori, were later taken to hospital for treatment for what Argentine radio described as "burns".

Officials from Conmebol, the South American Football Confederation, called the match off about an hour after the incident and the River players were escorted from the pitch under an umbrella of riot shields.

River manager Marcelo Gallardo, whose side were 1-0 up after the first leg, called the incident "deplorable" and "shameful".

Boca president Daniel Angelici said he had spoken to his opposite number and apologised for the incident but maintained the team should not be punished for the actions of fans.

"We will accept the responsibility that we have but I don't think the players are responsible," he told reporters.

"We will do all we can to help the police and we hope to find those responsible as soon as possible."

Angelici denied the notorious barras bravas, or hooligan firms, were responsible and said it was not possible to stop fans bringing weapons such as pepper sprays into the ground.

"An aerosol is small, I don't know how it works, but it is very powerful, it can fit in your pocket and when there are almost 50,000 people it can get by security," he said.

"This is society's problem, not football's problem. These people are sick."

Conmebol officials at the game said a disciplinary committee would meet on Friday and decide whether to replay the match, complete it at a neutral venue or award the tie to River Plate.

Boca were among the favourites to take the title for the seventh time after winning all six of their group games.

The rivalry between the two sides is one of the most heated in world football. It pits Boca, a traditionally working class side from the port area of the city, against their rivals, known as the "Millionaires".

The Boca Juniors fans are known for their passion and the Bombonera, which was packed to capacity on Thursday night, is a stadium few teams relish visiting.

Fans are located just inches from the touchline and separated from the players by high wire fencing. Police with riot shields often have to shield visitors from abuse and flying objects.

Although the Libertadores Cup is the South American equivalent of the Champions League, the standards of safety are a world away from the European competition.

The incident is just the latest in a long series of violent events in South American football.

In 2013, a Bolivian fan was killed by a flare fired by Corinthians fans during a Libertadores match.