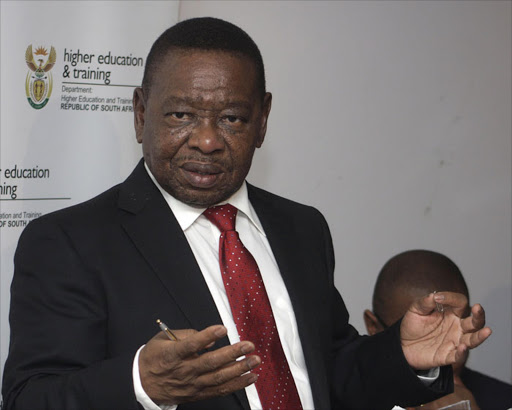 Higher education minister Blade Nzimande has called on student activists to focus on true transformation of education rather than allow themselves to be sidetracked by poo-throwing and destruction of statues.

Nzimande said his department will‚ before the end of the year‚ identify and quantify exactly what is meant by the transformation of higher education‚ including racial transformation‚ sound management‚ quality and access.

In this regard‚ Nzimande emphasised that he was very unhappy with the transformation of some historically disadvantaged institutions (HDIs) into institutions of quality higher education.

This year‚ his department has put aside more than R2 billion specifically to help and stabilise HDIs.

The corrupt way the massive National Student Financial Aid Scheme (NSFAS) is administered at some universities has cost the African National Congress (ANC) votes in student representative council elections — including losing the University of Fort Hare to the Democratic Alliance (DA) — and on Wednesday Nzimande admitted that he was shocked by the prevelance of NSFAS corruption on some campuses.

Therefore‚ a forensic audit will begin before the end of the month‚ focusing on institutions known to have NSFAS problems. The audit must be provisionally finished by the end of the year‚ Nzimande announced.

The minister also said his fight against the scourge of false qualifications will result in a blacklisting of anyone who lies about their qualifications.

Director-general of higher education Gwebs Qonde announced that a forensic audit of qualifications in the civil service is being initiated in collaboration with the South African Qualifications Authority‚ and that criminal charges will follow.

During the budget vote debate‚ opposition MPs tore into Nzimande‚ accusing him of strangling universities.

“The ANC is squarely to blame for the fact that there is no new generation of academics to take over from the older generation. When the current older generation is gone‚ there will be no-one left to take their place‚” warned DA MP and renowned academic Belinda Bozzoli.

She pointed out that no self-respecting young professional person would opt for an entry level academic career in which they would earn less than a rock drill operator.

She said the government expected universities to take in more and more students‚ but did not appoint more academics to ensure quality teaching‚ and did not increase university funding in real and monetary terms.

“The average amount the state has budgeted per student has declined from R20000 per year to R16000‚ and the average number of students per lecturer has grown from 38 to 55. In the United Kingdom‚ it is one lecturer per 17 students. We are a laughing stock internationally‚” Bozzoli said.