The Congolese bouncer who earns R450 a month 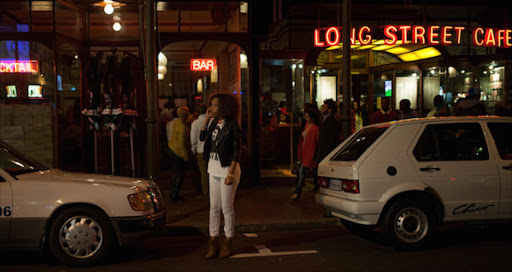 Refugees and asylum seekers have equal rights to the working conditions and job opportunities of South Africans, but because of their immigration status, they are vulnerable to exploitation.

On a cold windy day in Cape Town’s city centre, Patrice Keyenge*  guards the doorway to the bar where he works as a bouncer. His face is weary in the early afternoon, but he there are still a few hours to go before he can knock off at 6pm.

“I’m trying to do the best to survive. I don’t have a choice because I’m a foreigner in this country,” says the 45-year-old, who lives in Goodwood.

He has worked at a bar in Cape Town’s famed Long Street for four years, chasing away revellers who get too rowdy as the day wears on. Occasionally, he endures the xenophobic sentiments of customers who tell him to leave South Africa and go back to the Democratic Republic of Congo. But he hasn’t lodged a complaint with his employers, fearful to cause any disturbance that might lead to friction with management.

“It’s not easy to be a foreigner in this country. I’m staying here for six years. The customers call us kwerekwere,” Keyenge says, as pedestrians walk past him, laughing and chatting.

A husband and father, Keyenge has two children aged 13 and three. His wife is unemployed and his 13-year-old child is unable to attend school. Although his story is harrowing, it’s not uncommon for refugees and asylum seekers in South Africa to be exploited.

“A lot of people aren’t aware of their rights, so employers may take advantage of employees who work without papers. They pay them less or not at all,” says Anjuli Maistry, an attorney at Lawyers for Human Rights, who works on the organisation’s refugee and migrant rights programme.

Despite having the same constitutional rights as South Africans, documented refugees and asylum seekers are still often discriminated against by employers, particularly when working in low-skilled jobs. Many have not been educated about their rights and are reluctant to approach the Commission for Conciliation, Mediation and Arbitration (CCMA) or the labour court with their grievances.

Keyenge’s best option, Maistry says, would be to take his employers to the CCMA. But even then, justice is not guaranteed.

Thifulufheli Sinthumule, an advocacy officer at the Consortium for Refugees and Migrants in South Africa (Cormsa), an umbrella organisation that works with immigrant advocacy groups, says part of the problem is that there is no mechanism to educate refugees and asylum seekers about their rights once they enter the country.

“That leads most of the refugees and asylum seekers to try and see what are their means of survival, and to ask what sort of livelihood should I be engaged in for me to survive,” says Sinthumule.

Sinthumule says that in order to prevent the exploitation of refugees and asylum seekers, labour laws must be better enforced.

“We have seen in the past that there’s not much enforcement when it comes to labour exploitation, especially when it relates to migrants, refugees or asylum seekers,” says Sinthumule.

Maistry and Sinthumule agree that government and civil society need to educate refugees and employers about their rights and how they can access regulatory bodies such as the CCMA.

Meanwhile, Patrice Keyenge will still be standing at his post outside the bar. He is afraid to leave his job and unsure of his chances of finding another. So he remains, just another anonymous bouncer on Long Street who people walk past, his story and struggles unknown.