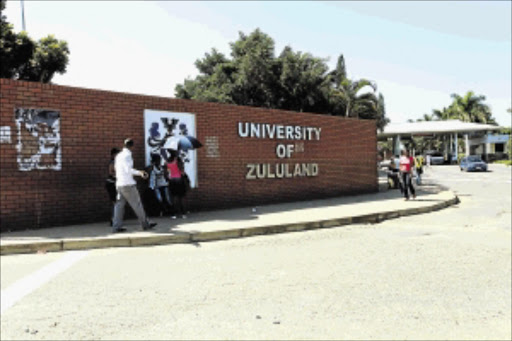 The University of Zululand is facing a management crisis that has prompted Higher Education and Training Minister Blade Nzimande to intervene again.

The institution has suspended top senior managers, including those believed to have swindled it to the tune of R11.4-million.

Sowetan has learnt the six executive managers, who includedirectors and deans, were suspended two weeks ago.

An insider told Sowetan the money that went missing was meant to pay service providers.

Some of the managers could face charges of colluding with companies hired to build residences at the university.

"The department [of higher education and training] gave the university R466-million in 2013 to build residences and to date nothing has been done," said the source.

"Some of the people who have been suspended were colluding with the companies to get kickbacks and some are shareholders in the companies."

Provincial secretary of the National Education Health and Allied Workers' Union, Phakama Ndunakazi, said there were "serious problems" at the university.

For three days next week the union's provincial leaders will be at the institution to help find a solution.

"The problem at UniZulu is lack of management, there is no leadership," Ndunakazi said.

He said the union wanted Nzimande to intervene.

This comes after Nzimande dispatched a team led by his director-general Gwebs Qonde last week.

The university is no stranger to management failures.

In 2010, Nzimande appointed Professor Hugh Africa as an independent assessor to investigate the affairs of the university

Some of the issues investigated included governance, financial mismanagement and administration.

Meanwhile, classes at UniZulu are set to resume today after they were suspended two weeks ago following a protest by students. Grievances lodged include the lack of funding by National Student Financial Aid Scheme and poor state of residences.