Schools to manage own funds 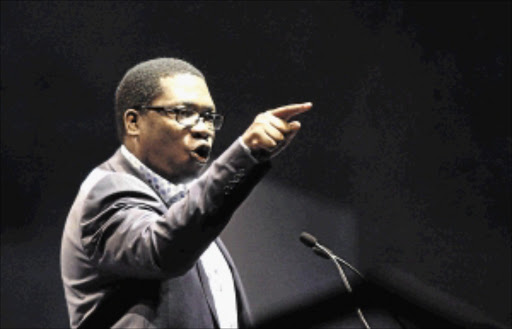 As of next month all schools in Gauteng will manage their own funds that amount to millions of rand.

Panyaza Lesufi, MEC of education in Gauteng announced that all the province's schools will become Section 21 schools from May 1.

When a school is not a Section 21, its budget is administered by the district office. School governing bodies (SGB) are already undergoing financial management training.

He said it did not make sense that when a school wants to fix a broken window it has to write to the district office and request money.

He said he had received reports that at times, schools were discouraged because it took long to receive money from the district.

The money allocated to schools depends on the number of pupils it enrols.

"It's almost R600-million, but the money allocated to schools differs per quintile. It's R1008 per pupil," he said.

Schools are categorised in groups called quintiles. Schools in quintile 1, 2 and 3 are no-fee schools while quintiles 4 and 5 are fee-paying schools.

In recent years, SGB members and principals have been implicated in financial mismanagement of school funds.

Recently, Lesufi disbanded the SGB of Roodepoort Primary School after a forensic report implicated it and the then acting school principal in financial irregularities.

Some of the findings in the report were that there were no quotations for most of the expenditure.

Also, a report by civil society organisation Corruption Watch found that principals and SGB members were the biggest culprits when it comes to mismanaging school funds to enrich themselves.

The organisation said it had received 935 reports of corruption from the period of 2013 to last year and the majority of these came from schools in Gauteng.

"The most commonly cited culprits are principals, who either collude with certain members of the SGB, or in the schools where the SGB does not have the capacity to manage school funds, principals are able to mismanage funds alone," reads the report.

Lesufi said schools would go through a rigorous training process to ensure that they are able to handle the money.

"If you give money to people who you have not trained, the money can be abused. So when they have gone for training and the team that will be training them says they are ready [to handle the money] we will give them the money," he said.

School funds deal gets thumbs up

School governing body (SGB) associations have welcomed the announcement by Gauteng education MEC Panyaza Lesufi that all schools in the province will manage their own funds.

However, associations that spoke to Sowetan said the danger lay in the possibility that the department was only paying lip service by saying it would train schools in how to manage the funds.

"It's easier for parents to be manipulated because the only skill they bring is that of being a parent," said the secretary of the National Association of Parents in School Governance, Marks Ramasike.

"It's rare that you would find parents that are bringing tangible skills, especially in rural and township schools, and it then becomes paramount to capacitate them."

Ramasike said in many cases parents are manipulated by principals to sign blank cheques, and they don't even know that what they are doing is wrong.

Secretary of the National Association of School Governing Bodies, Matakanye Matakanye, said the SGB training should not only focus on how to handle finances but should be about the development of the entire school.

He said the association welcomed the announcement and that it was high time schools managed their finances instead of relying on district offices to allocate money to them.