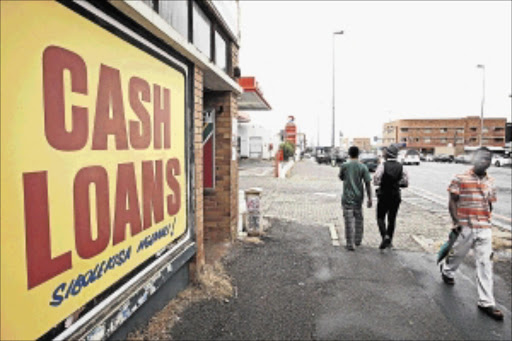 HARD TIMES: Many people end up in debt due to overspending. As a result they end up approaching cash loan groups and loan sharks Photo: ALAN EASON

An inability to access loans often drives vulnerable consumers to unscrupulous moneylenders who can charge them exorbitant and unregulated interest rates.

Although many consumers also know that it is illegal to give their identity documents to a third person, conditions often force them to compromise themselves with unregistered money lenders.

These moneylenders continue to give loans at high interest rates because it is not easy to detect their practices unless consumers warn the National Credit Regulator about them.

Sadly, consumers seldom report these loan sharks because they are dependent on their illegal operations.

Take the case of Nonzwakazi Futshane, who operates from the Springs Civic Centre. She told Consumer Line that she did not know that she could now register with the National Credit Regulator to comply with the law.

Futshane charges her clients 50% interest even though the law states that the interest on an unsecured loan is supposed to be 32%.

She operates from her handbag and the boot of her vehicle.

One of her clients, Sithembela Mqwathi, 44, a father of four, says he desperately needed a loan when he was referred to Futshane by a colleague.

He says after calling her, Futshane told him to bring original copies of his pay slip, his ID, driver's licence and an ATM card.

"I thought she wanted to know that I [was employed] and had an active bank account and it never occurred [to me] that she wanted me to surrender [the documents for security] in exchange for cash."

There was no contract signed between him and Futshane and her terms of repayment are one-sided, as she expects a single payment at the end of the month, Mqwathi says.

But because there were debit orders that went through before Futshane could access his account, she could not get the R3000 she wanted, he says.

"She later [tried to] barge into my house and told my wife she came to remove my furniture because I failed to repay her.

"When she did not succeed she later threatened to deduct it from the account of the colleague who referred me to her."

Sonwabo Manxumakazi of Mzumbe also handed his ID and his bank PIN number to Futshane, though he knew it was against the law to do so.

"What can you do when reputable lenders can't give you loans?" he asks.

Elias Soxokazi, another former client, says he will no longer use Futshane's services.

Soxokazi says Futshane was unreasonable and did not understand that desperate consumers go to her because they are cash- strapped.

Futshane's clients say they are all prepared to service their loans if she is amenable to reasonable repayment terms, because they all earn less than R5000 after deductions.

"We complain because her terms of repayment put us in a worse position."

Futshane admits that she is guilty of this unfair business practice, and says that she takes her customers' documents so that she can get her money back without hassles.

She promised Consumer Line that she would hand all the documents back to her clients today.

She said she started her moneylender business this year to augment her salary.

She is in the building industry and says she does not know that she must register as a moneylender even though she has less than 100 clients.

Consumer Line persuaded her to register and comply with the law, which she agreed to do.

Hennie Ferreira, the chief executive of Micro Finance of South Africa (MFSA), says the NCR has a duty to investigate and curb this practice.

He says Futshane is acting illegally and ripping off consumers.

"The NCR need to take action, but they only do so if the consumer brings a complaint and clients are seldom prepared to do so because they [are] dependent on these illegal operators," Ferreira says.

He says the industry is overwhelmed by the mass of unregistered loan sharks who only have regard for their own pockets and resist any form of formalisation.

Ferreira adds that being compliant costs money that unregistered loan sharks are not prepared to spend.

The MFSA and its members condemn this practice and have urged consumers to help rid the market of loan sharks by not using their services, advising them not to hand over their bank cards and other documents, and to inform the NCR and hold them accountable for any suffering caused by these sharks.