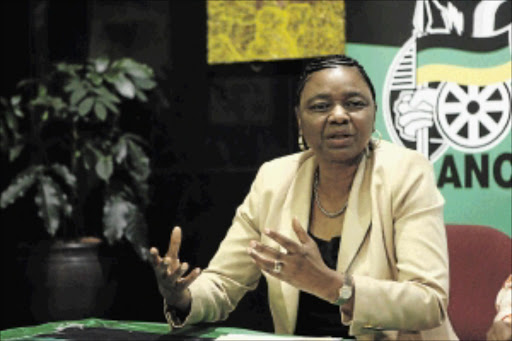 NEED FOR CHANGE: Hlengiwe Mkhize, a former commissioner of the Truth and Reconciliation Commission, where some of the truths about apartheid-era death squads were exposed, says not everybody understands that reconciliation can be used as a tool for nation building. PHOTO: MOHAU MOFOKENG

On April 15 1996, Archbishop Desmond Tutu led the Truth and Reconciliation Commission to its first meeting.

And, years later, many South Africans seem to be bent on trashing the work of the Truth and Reconciliation Commission (TRC).

It was a tragic irony that on the date the work of the TRC was supposed to be celebrated last week, foreign nationals of African origin were under xenophobic siege.

And incidents of racism have become a regular occurrence.

Ironically, among those who have been at the receiving end of racial tensions is Hlengiwe Mkhize, former TRC commissioner, who admits that the ideals of the TRC have not been realised.

Mkhize, who sat on those gruelling sessions of the TRC where some of the truths about apartheid-era death squads were revealed and copious amounts of tears shed, believes not everybody understands reconciliation as a tool for nation building.

She lives in Fourways, an affluent Johannesburg suburb. But the high walls there clearly can't keep racism away.

For her, racism manifests itself in what appears to be small and big ways. For the small part, she recalls how one morning her white neighbour told her not to feed her puppy at 6am because the serving dish makes an annoying sound.

"People need to change. What dominates are white values and their interests."

The deputy minister of telecommunications and postal services and treasurer of the ANC Women's League often suppresses the urge to walk out of Parliament when the legislature debates land reform issues.

It appears she feels the wrath of racism in parliament in a big way when the matter is on the table.

"People are insensitive and insulting, not understanding the pain of forced removals. People were removed and later employed on their own farms but exploited by the bosses," says Mkhize, clearly frustrated at slow pace of land redistribution to blacks.

Mkhize is frustrated that despite the intentions of the TRC there isn't sufficient enthusiasm to be built on the reconciliation foundation laid down under President Nelson Mandela.

"Over the years I have been monitoring how we are doing on reconciliation. It's deeper than what we thought. There should be a commitment to finding each other all the time as a nation."

She says churches are supposed to help in reconciliation but some hold racially segregated services in a day. "Why can't such churches have one service that accommodates everyone?

"Looking back at the spirit of TRC, we were supposed to have dealt with that ... those are realities we face today. We need to do more to unite the people."

She is critical of the government for its failure to lead the nation on race issues. The raging debate on statues and street renaming were dealt with during the TRC.

Its report recommended the facilitation of renaming of streets and community facilities in order to remember and honour individuals or significant events.

It also called for the facilitation of monuments and memorials and the development of museums to commemorate events of the past.

"Looking at the fight now on statues, the TRC report talks to what should happen, which statues should be out there.

"This is a failure on our part in providing leadership on race...

"If people do not buy into the shared history then we will remain divided."

On a positive note though, the TRC recommended the building of Freedom Park - which was done.

But Mkhize believes the "hugs and kisses" between black and white people do not deal with what kind of a country we need.

With the Jews, when anyone speaks about the Holocaust, people have to be careful and treat it with sensitivity.

But with apartheid, she says people talk about it as though they are commenting on fish and chips, as if no one died. "Some were not found. We live in a country where people like Wouter Basson are fighting for their freedom as though their acts were good.

"In other countries people defend their sufferings. They are not afraid to talk about it.

"Here when we speak about the past, we are told we should stop going back."

She says there is a need for strong leadership to deal with reconciliation and building an inclusive economy.

"We need to find an angle on where we start, who are the people to talk to. It cannot be black people only who are prepared to talk while those holding us back and have benefited from apartheid do not want to do anything.

She says Mandela's message - "Never, never and never again shall it be that this beautiful land will again experience the oppression of one by another and suffer the indignity of being the skunk of the world" - should never be forgotten.

Mkhize and her comrades in the governing party have a lot to do to show leadership.

They are in power, after all.