Durban on lock-down as police try to contain xenophobic attacks 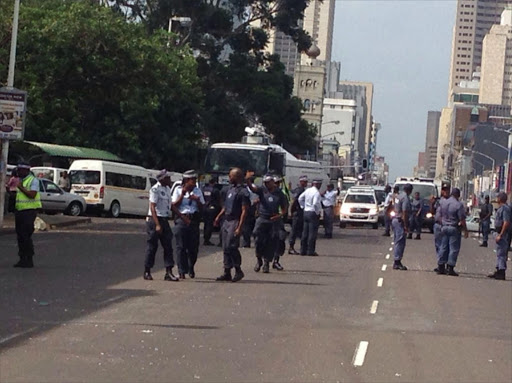 The group of about 200 in West Street has regrouped further up the road after initially being dispersed by police‚ who fired stun grenades. There are also reports that shops in Point Road are being targeted.

Ethiopian shopkeepers on West Street told The Times they were terrified and begged for help against the group of about 200 who had stoned their shops and threatened to kill them.

As they ran in every direction after police intervened‚ some tried to set a car alight by starting a fire under the vehicle‚ but police quickly put it out.

A group of foreigners briefly tried to retaliate against the mob but after initially refusing to disarm and disperse‚ police managed to break up the attempted retaliation.

Police have advised foreign shopkeepers to stay indoors until calm can be restored.

This follows xenophobic attacks in KwaMashu and Umlazi‚ prompting calls for urgent intervention.

“King Zwelithini must go to the affected areas and address the people in person. He must urge them to stop these unwarranted attacks on economic migrants‚” Cope’s Dennis Bloem said in a statement earlier today.

“If looting and xenophobic violence is not nipped in the bud‚ all of South Africa will suffer.

“The damage that these attacks have caused to the image of South-Africa is immeasurable and irreparable. The enormous legacy of Nelson Mandela is being eroded. The hard work he undertook to reintegrate us with African and world communities is being shattered by the xenophobic attacks we are witnessing. The dream of African Renaissance lies in ruins.”

“Violence and looting are becoming deeply embedded amongst many people who feel economically excluded. Today‚ it is the foreign owned shops.

Tomorrow it will be shops and businesses owned by fellow South Africans. Our institutions of state and all private sector role players must act collectively and urgently to deal with the problems that are manifesting themselves in our township(s)‚” said Bloem.