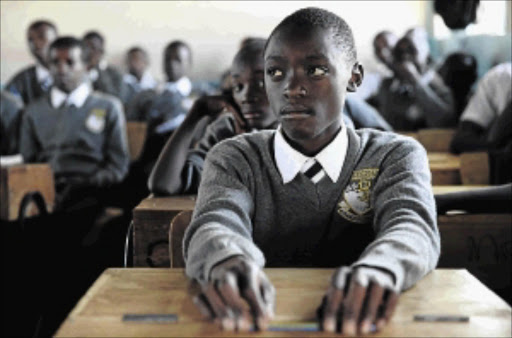 knowledge is power: A boy attends a class, which is part of a programme to train boys to intervene when witnessing physical or sexual assault, at a school in Nairobi, Kenya photo: Katy Migiro/REUTERS

The schoolboy watched as a man tried to remove the nappy of a little girl he was dragging along a Nairobi riverbank, suspecting that he was going to rape her.

Having been trained to defend girls against sexual assault, the boy called other young men to help him confront the man and rescue the child.

"It would have been fatal," said Collins Omondi, who taught the boy as part of a programme to stamp out violence against women and girls in Nairobi slums. "If this man would have assaulted this kid, he would have thrown her inside the river."

Omondi teaches a Your Moment of Truth programme, run by the charity Ujamaa Africa which encourages adolescent boys to stand up against violence towards females.

The training is "highly effective" in improving attitudes towards women and increasing the likelihood of successful intervention, researchers from Stanford University, University of Nairobi and United States International University said. The training increased boys' successful interventions when witnessing physical or sexual assault from 26% to 74%, according to their study to be published later this year in the Journal of Interpersonal Violence.

Interventions in verbal harassment also increased, and rape by boyfriends and friends of girls in schools where Your Moment of Truth was taught dropped by 20%, from 61% to 49%, researchers said.

"Our main focus on the curriculum is positive masculinity for the boys, positive empowerment, and actually making them gentlemen on issues to do with the prevention of rape and standing up for the rights of women," said Omondi.

"If they say the boys are actually the problem, we the boys can actually be part of the solution."

Every high-school child in Nairobi - some 130000 students - will undergo the six-week programme by the end of 2017 with funding from the British government, which is focusing aid on finding out what works to prevent violence against women.

One in four women and girls in Nairobi's dangerous slums has been sexually assaulted, Ujamaa said. Its No Means No worldwide programme started teaching self-defence to Nairobi schoolgirls in 2010.

Ujamaa expanded the programme to include boys as the girls said that the main perpetrators of rape were their boyfriends.

Before the class, more than 80% of boys said girls wearing miniskirts were inviting boys to have sex with them. Afterwards, it dropped to 30%, Ujamaa's data showed.

"It's because of the way they have been brought up," Omondi said.

Violence against women is common in Kenya. About a dozen women were stripped naked and assaulted last year because they were wearing miniskirts or other clothing perceived to be immodest.

Almost half of Kenyan women who have ever been married have been physically abused by their husbands, according to government data from 2008-2009.

Some 53% of women believe men have the right to beat their wives for reasons such as arguing with them, neglecting the children or going out without informing them.

The programme uses social learning theory, whereby people copy the behaviour of those around them, to try and get boys to stand up for women and change social norms. This can involve simple actions, like walking away from a classmate talking badly about a girl.

"Many boys say they cannot intervene in a situation where a girl is being harassed because they feel they [boys] are not confident enough," said Omondi.

"But you can stand up and say: 'No. This man is doing something wrong.' Out of that, many other people will join hands with you."