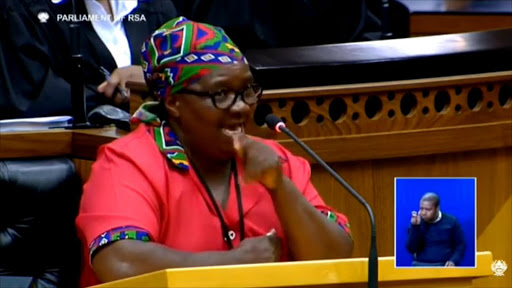 All eyes were on Nokulunga Primrose Sonti a parliamentarian for the Economic Freedom Fighters (EFF) during last night’s seating of parliament.

Speaking in support of the motion of no confidence in President Jacob Zuma which had been brought by Democratic Alliance parliamentary leader Mmusi Maimane, Sonti was unapologetic as she laid into the ruling party.

“Two years have passed but nothing has changed in Marikana," she said

She also accused the President of being a thief and members of the ruling party of living lavish lives while widows suffered in Marikana.

She said the only thing the government had done for the people of Marikana was deliver toilets “which were being sold to the Shangaans (in reference to foreigners) by ANC members”.

Her statement about Shangaans led to objections from the ANC MPs who found the term unparliamentary.

She refused to withdraw her statements and was ordered to sit down before finishing her speech.

WATCH THE VIDEO BELOW:

I watched parliament in dismay yesterday when honourable Sonti while in her seemingly genuine agitated state made distasteful remarks about Amashangaan.

To reaffirm how sensational her remarks were, is the manner in which two of her fellow members desperately tried to justify such, but the Justification itself was one which implied that You South African Tsonga People please do not worry, the member is/was referring to foreigners not you. Does this make it any better though ????

The Justification was that in township lingo, amashangaan is construed to refer to foreigners. Part of my life I stayed in the township, I even stayed in Johannesburg inner-city and I’ve always understood derogatory remark to foreigners as Makwerekwere until EFF introduced the concept of Amashangaan as an alternative Synonym.

I hardly doubt Honourable Sonti in her remark would honestly refer to a Nigerian or a Somalian as Amashangaan. Not this backyard and barbaric xenophobic mindset is specifically directed at Shangaan speaking people as foreigners.. yes it is true she was referring to foreigners but which foreigners ?

Definitely not Europeans, Nigerians but Shangaan speaking people, who for years has been persecuted as idiots and foreigners in their own country within Gauteng Province.

This matter can not be looked at in isolation, this deep-rooted intolerance to Shangaan people in Gauteng dates back to generations and it is just extremely disappointing that a Parliament member would utter such on national TV.

We know who are this foreigners in Marikana who happens to have irked the member so much, this foreigners whom she believes are not worthy of receiving anything from Government.

These are Shangaan people within Marikana not any other person coming from anywhere else. I am reluctant to believing that Honourable member Sonti would refer to a Lesotho or Nigerian citizen in Marikana as Amashangaan.

Target group are Shangaan speaking people be it from Mozambique, Bush or Malamulele as in any event I doubt Sonti have necessary skills to differentiate one from the other.

Be that as it may, why this intolerate attitude against Shangaan speaking people simply because their origin can be traceable to a foreign country?

What is rather more saddening is the honourable didn’t withdraw these derogatory remarks but to the contrary her senior party members came to her defence.

I think it would only be fair of Honourable Sonti to publicly apologize to the Shangaan people and foreigners in general. - Tyron Pfukani Khoza