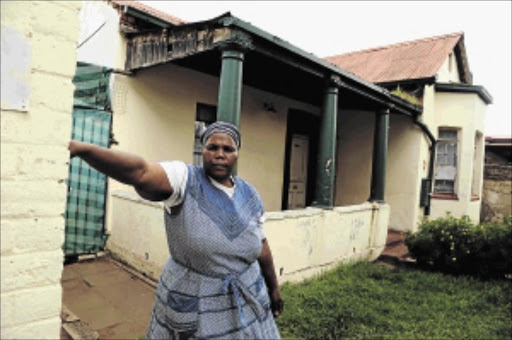 UNMOVED: Betty Ndaba next to the house in Turffontein, Johannesburg, that she has been living in for the past 16 years PHOTO: PETER MOGAKI

DID you know the Prevention of Illegal Eviction from Unlawful Occupation of Land (PIE) Act gives illegal occupants better rights than legal owners or landlords?

Take the case of Betty Ndaba, who is threatened with being illegally evicted from the house she has occupied for the past 16 years in Turffontein, Johannesburg.

The person who claims to have bought the house, McBernard Aminu, has no eviction order and has not given the occupant an opportunity to tell the high court why she should not be evicted from the house.

Ndaba, 51, says she entered into a verbal lease agreement with a landlord she knew only as Julia in 2000, renewable every month.

But after Julia's death in 2002 she did not pay rent as no relative of Julia's came to collect the rent or claim ownership of the house.

Ndaba also did not know who administered the estate of the deceased but continued to live in the house for years in the hope someone would eventually come to legally claim it.

A few years ago, a man came to claim ownership of the house but had no proof, Ndaba recalls. She says there have been other chancers who tried to evict her, but they all failed to prove they owned the house.

Ndaba says only Aminu provided documents, however they are fraudulent court documents claiming the house was sold at an auction. Aminu could not tell her where and when the auction was held.

When trying to evict her last week, Aminu gave her documents that had no court stamp or sheriff's signature to authenticate the sale, she says.

"All I know is that here at Turffontein, auctions are held under the shadows of trees and soon thereafter residents will be harassed with fake eviction notes."

Ndaba says reporting Aminu to the police did not help as they also advised her to vacate the property.

In her quest for the truth Ndaba went to the North Gauteng High Court to view the documents allegedly authorising the sale of the house she occupies and discovered that Aminu's documents were fraudulent.

She discovered that Aminu's case 'shared' a case number with another case.

How to evict illegal land occupiers

IN TERMS of the Prevention of Illegal Eviction from Unlawful Occupation of Land Act, the law says any unlawful occupier who lives on the land/property for more than six months at the time of legal proceedings can be evicted, but the new owner of the property may be forced to find alternative accommodation for them,

Ndaba acknowledges that she does not have the right to the house but says she is willing to vacate or negotiate new terms once the eviction procedure has been followed.

Aminu, from Lyndhurst, told Consumer Line he is the legal owner of the house and that Ndaba was trying to hijack his property. When asked if he had obtained an eviction order in terms of the PIE Act he backtracked and denied threatening Ndaba with eviction.

He failed to show up at the place and time he proposed to Consumer Line to prove he bought the house legally.