‘Shop owners should not return yet’ 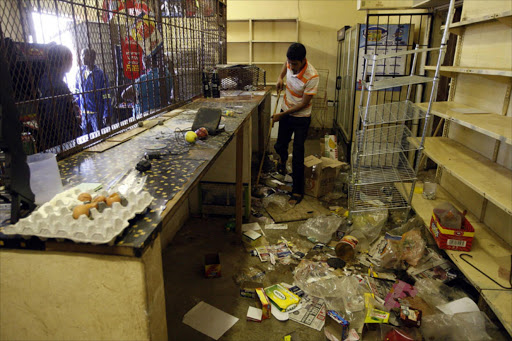 File Photo: This foreign owned Tuck Shop in Soweto was looted by residents after a teenager was shot by a foreign national shop owner in Snake Park. Picture: Vathuiswa Ruselo

Foreigner shopowners displaced by violence and looting in Gauteng should not return to their businesses yet, the Somali Community Board said on Monday.

"The situation is still volatile... it is not yet time for reintegration into the communities. We appeal to our members to wait for government to give us a directive," chairman Amir Sheikh said in Soweto.

He arrived with Gauteng community safety MEC Sizakele Nkosi-Malobane in Snake Park, Soweto, to visit the family of Siphiwe Mahori, 14.

Mahori was shot dead, allegedly by Somali shopowner Alodixashi Sheik Yusuf, in Snake Park, last Monday. He allegedly fired at a group of people trying to rob his shop.

Sheikh said residents drove out a shopowner who tried to return to Tshepisong on Monday. Groups of criminals were looting from foreigners, he said.

"I am not saying this is purely driven by xenophobia, but criminals have actually come together and attacked shops to steal," he said.

Gauteng premier David Makhura had assured the traders at a meeting that government would ensure their safe return to communities, said Shaik.

A distraught Daniel Mahori, Siphiwe's father, said he was happy the Somali organisation came to support the family.

"They are not the killers. We are grateful that they can assist us however they can," he told journalists.

Meanwhile, residents of Snake Park said they would not let foreign shopowners return.

"They must never return...what happened was horrible. How do you shoot an unarmed child?" said Zwelakhe Dlamini, 67, who lives in the same block as the Mahoris.

"I arrived here in 1991 and we used to buy from big retailers and local small businesses. We do not have a problem with returning to the olden days," she said.

Yusuf appeared in the Protea Magistrate's Court on Monday on charges of murder, attempted murder, and illegal possession of a firearm. He is expected to be back in court next week to apply for bail.