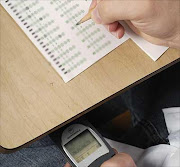 Matriculants found to have cheated could be banned from writing matric for the next three years, the education department said in Durban on Monday.

"Criminal charges? It is a possibility. There is some element of fraud and misrepresentation."

He said invigilators found to have been complicit would face disciplinary inquiries that could lead to letters of final warning or even dismissal.

Hearings into the alleged cheating at 20 exam centres in KwaZulu-Natal were set to begin in Durban on Monday.

"Their results could be declared null and void and they could be barred from writing [matric exams] for the next three years," Mhlanga said of the matrics found to have cheated.

He said the extent to which pupils and invigilators were punished would depend on their involvement in the cheating.

Mhlanga would not say how many students or invigilators were believed to have been involved, but that most of the 20 implicated exam centres in KwaZulu-Natal were in rural areas.

Umalusi spokesman Lucky Ditaunyane said it was the first time the monitoring body had detected such mass cheating. He expected the department to submit a report to Umalusi by January 27.

Mhlanga said those pupils who would be questioned were entitled to have a parent or legal guardian present. Those who wanted to have legal representation however needed to inform the department first.

He said that during the course of Monday morning the department, Umalusi and teacher unions had agreed on procedures for the hearings.

Mhlanga said there would be an appeal process for those found guilty.

The Democratic Alliance welcomed the investigation.

"This is not the first time that the KZN education department has been placed in the spotlight when it comes to cheating during examinations," the party's KwaZulu-Natal education spokeswoman Mbali Ntuli said.

To keep launching investigations after the fact was not good enough.

"In the Eastern Cape there are 16 exam centres that are being investigated."