10 years on, where did all the tsunami debris go? 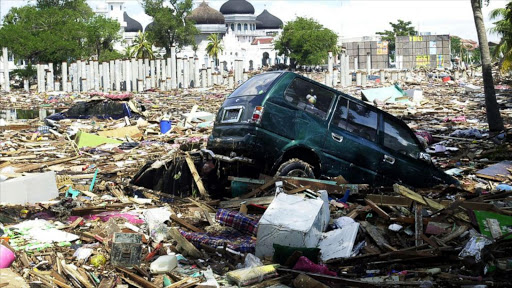 Driving in the remade communities today, it's easy to wonder where it all went. Some of it is still there - recycled into road materials, buildings and furniture. Some of it was burned, creating new environmental hazards. And most of it was simply washed out to sea.

Ten years after that gigantic wave engulfed this city of 4 million on the northern tip of Indonesia's Sumatra island on the day after Christmas, Banda Aceh has been almost totally restored. The tangled mountains of rubbish are gone, and it's hard to imagine the destruction that once choked rivers, blocked streets and ripped up trees by the roots.

The endless heaps of twisted metal, splintered wood and broken concrete have all disappeared except for some scattered reminders for tourists and local residents. A drive along the coast highlights a stunning coastline with new houses perched near the beach. Lush mangroves have been planted to help withstand future tsunamis, fishermen are back at sea and farmers are again working their rice paddies.

Still, authorities are concerned about the health and environmental risks posed by debris contaminated by oil, asbestos and medical waste sitting on the seafloor off the coast and in 32 unregulated dump sites around the city.

"Unsafe disposal of waste will cause further environmental damage in the long term," said Kuntoro Mangkusubroto, who headed the Aceh and Nias Reconstruction and Rehabilitation Agency, which led the massive clean-up effort and was dissolved in 2009 after the job was judged finished.

Banda Aceh was the hardest hit city by the disaster, which devastated hundreds of communities in more than a dozen countries around the Indian Ocean.

The tsunami left an estimated 10 million cubic meters (13 million cubic yards) of debris here, most of it washed into the ocean, Mangkusubroto said. If all that was squeezed into a 1-hectare (2 1/2 acre) field, it would create a tower of trash 1,000 meters (3,000 feet) tall.

Cleaning up the wrecked city was a mammoth, often overwhelming, task.

For weeks, the streets were strewn with rubble, and rescue workers retrieved dead bodies from under houses and in ponds, said Abdul Mutalib Ahmad, who worked at Banda Aceh's only landfill and witnessed the tsunami from atop a three-story building.

"Debris was everywhere," he said. "We thought we were facing severe public health problem with the massive amount of waste."

At first, many survivors simply burned wood and other garbage. But authorities discouraged them from doing that because it polluted the air and could expose them to harmful toxins that might lead to respiratory problems. Some trash was covered with oil or chemicals, making it extremely flammable and hazardous, and in at least one case, a fire spread uncontrollably over a large area.

As key roads were cleared, trucks began carting tons of debris to the landfill every day for at least a year, Ahmad said.

But some waste inevitably got dumped at random sites around the city. They still contain leaky oil drums and asbestos-laced housing materials.

Hazardous waste that was found among the rubble was buried in a separate marked area inside the city's landfill, according to Tomi Soetjipto, the Indonesia spokesman for the U.N. Development Program, which oversaw much of the clean-up. And nearly 50 tons of expired medications - some of it donated after the tsunami - sit in a warehouse awaiting safe disposal.

Three months after the tsunami, the UNDP started a $40.5 million recycling program that employed 400,000 temporary workers to pluck wood and stone from the rubble and use the materials to rebuild roads and houses as well as to make furniture. The recycled waste was used to reconstruct 100 kilometers (62 miles) of roads and manufacture 12,000 pieces of wooden furniture, Mangkusubroto said.

Some 67,000 metric tons of other recyclable materials such as glass, plastic and cardboard were diverted from landfills and sold in local markets.

Indonesian authorities say the clean-up was possible only with the help of the international community.

"Finally, the mounting tsunami rubbish was cleared. For such a huge job like that, the world didn't leave us alone to face it," Mangkusubroto said.