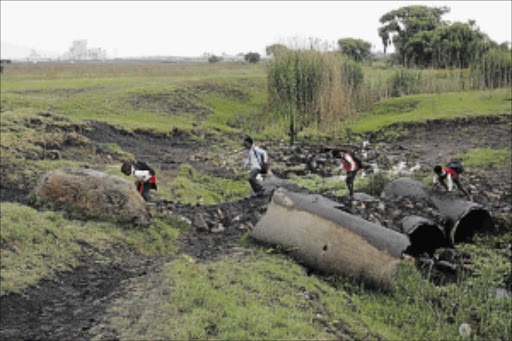 RISKY: In the absence of a bridge over a stream in Delpark Extension 4 near Delmas in Mpumalanga, Delpark Primary School pupils climb over damaged pipes to get to school PHOTO: ANTONIO MUCHAVE

PUPILS from Delpark Extension 4 near Delmas in Mpumalanga risk their lives daily crossing over dilapidated water cement pipes to get to school.

Their only other option is to go across a busy motorway where they risk being run over by speeding cars.

Maria Sindani, a mother of four, wakes up at 6am to watch her children cross over these pipes.

Her children leave the house dressed neatly, but by the time they get to school they're covered in mud.

Sindani says when it's raining she doesn't send her children to school because she fears they might drown because there is a stream under those pipes.

"Every day I worry about their safety - will they come back from school? When there are heavy rains and the stream is overflowing, I fear they might slip and drown," she said.

Sindani said these conditions have affected pupils badly because teachers constantly complain about their poor level of concentration in school.

"They get to school tired and as a result their school performance has declined. Teachers also complain about their untidiness at school."

Members of the community said last year a child slipped and died while crossing the pipes to go to school. They said that during this year's national elections political parties promised to correct the situation, but nothing has been done.

Another parent, Vouter Mtshali, said he was constantly worried even on the weekends because children liked playing near that area.

"It's difficult if a parent depends on a social grant, because they cannot afford to pay for transport to take them to school."

Victor Khanye local municipality spokeswoman Sentebaleng Masemola said the municipality has intervened by asking a local mine to build a bridge over the stream as part of its local economic development social labour plan project.

"The municipality awaits the approval by the department of water and sanitation for a water use Licence before the project can be implemented," Masemola said.

Mpumalanga department of education spokesman Jasper Zwane said they will talk to the municipality about plans to remedy the situation.