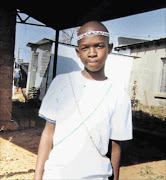 SLAIN: Thabo Tshabalala was stabbed to death in the classroom by a fellow pupil

BEFORE he drew his last breath, Thabo Tshabalala smiled and called out the name of the boy who had stabbed him.

He then collapsed on the floor.

This chilling account was related by classmates of the 14-year-old pupil at Bula Dikgoro Primary School in Mamelodi East, Pretoria.

The Grade 6 pupils told Sowetan yesterday that the 14-year-old boy who stabbed Thabo had been playing with a knife in class on Monday.

"He kept on pointing it at us and Thabo told him to stop but he did not," said a pupil.

She said the boy pointed the knife at Thabo and then stabbed him twice in the shoulder and chest. "We quickly ran out screaming to call our teacher," said one of the pupils. They said the teacher had left the class and had instructed them to study while she was away.

"We feel so sad. Thabo was a good person who was full of jokes," said another pupil. "We will really miss him. It's not nice now that he is no longer around."

The boy who stabbed Thabo appeared in the Mamelodi Magistrate's Court yesterday. The case was postponed to December 10.

A court official said the youth was assessed by social workers before appearing in the Child Justice Court. He has been released into the custody of his guardians.

Thabo died just hours after his mother, Dianah Tshabalala, gave birth to a baby girl. His elder sister Anna Tshabalala said: "The whole class was covered in blood and he was lying there dead."

The spokeswoman for the Gauteng department of education Phumla Sekhonyane said they would investigate.

This is a second incident of stabbing at a Pretoria school in a space of a few months.

In August, a pupil was stabbed and killed by another pupil outside the school gate of Central Secondary School in Soshanguve.

In another incident, a pupil was stabbed by another pupil at assembly at Isizimele High School in KwaZulu-Natal late last year and later died in hospital.

A report on school violence by the Centre for Justice and Crime Prevention found that one in five high school pupils, which translates to 1020597 pupils, had been victims of violence between August 2011 and August 2012. The report revealed that pupils had mentioned that weapons like knives and guns were easily smuggled into schools.

The spokesman for the Department of Basic Education, Elijah Mhlanga, said there was little the department could do to curb violence in schools. He said communities needed to start taking ownership of schools and that parents must also communicate with their children and pick up if there are elements of bullying at school.