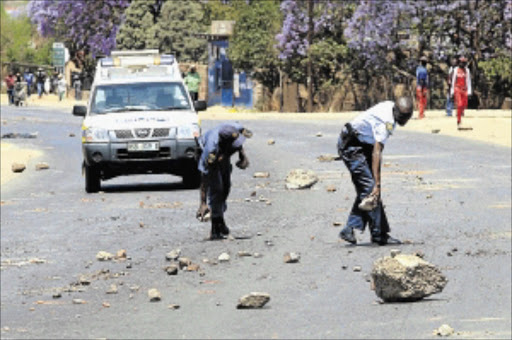 OFFICIALS with vested interests in water supply contracts are believed to have sabotaged water distribution in Mmakau by stuffing a plastic bag into one of the main reservoir pipes.

This led to the water supply being disrupted, which resulted in violent outbreaks and a stayaway in the North West peri-urban settlement.

The plastic bag was spotted yesterday morning at a reservoir in Zone 1, GaRankuwa.

This escalated suspicions that Madibeng municipality officials who have interests in water trucks had tampered with the supply.

The area gets its water through ODI Water Services, who have a contract with Madibeng. The company yesterday referred all questions to the municipality.

Madibeng municipality spokeswoman Lebogang Tsogang had not responded to requests for comment at the time of going to print.

The community went on the rampage and shut down the settlement on Monday and early yesterday.

Workers were barred from going to work, schooling was disrupted and the local train station was closed.

"It came as a shock to us that someone could temper with water for financial gains," said protest leader Elliot Motsepe.

"Technicians at the reservoir were equally shocked and we know it's done by people who want municipal tenders to truck water," Motsepe added.

He said their problems began about a month ago when most of Gauteng faced a water crisis.

"Prior to that our water supply was fine and suddenly we had to use buckets of water from fire hydrants and other townships. Madibeng municipality knew about it but nothing was being done," said Motsepe.

Madibeng mayor Jostina Mothibe addressed the community on Monday. Water was restored yesterday afternoon after the plastic bag was removed.

"We regret keeping children out of school but we would not have got water had we not protested," said Motsepe.

Earlier this year Madibeng came under the spotlight when the water supply to several townships was halted. This started a protest which resulted in four deaths.

Last month, the parliamentary portfolio committee on water and sanitation visited Madibeng to assess water interventions. They expressed dissatisfaction with the progress as many people still used long drop toilets.

Another resident Sello Mokoena, who also confirmed the plastic bag incident, said the community would reinforce its demand to be reinstated into Gauteng. Mmakau was incorporated into North West in 1998.