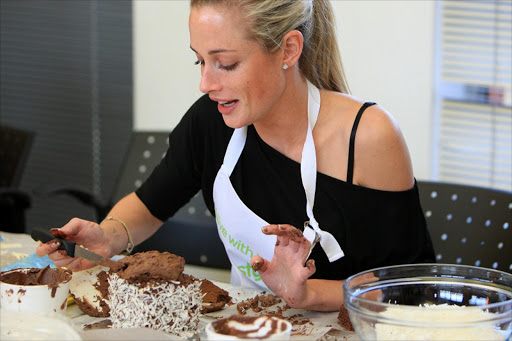 Kim Martin, Reeva Steenkamp's cousin, made a tearful plea Thursday for Oscar Pistorius to “pay for what he has done,” as the prosecution sought to ensure the Paralympic athlete goes to jail.

“Pistorius needs to pay for what he has done, for taking Reeva’s life, for what he’s done to my uncle, to my aunt and the rest of my family,” she said.

Martin finished her evidence in aggravation of sentence by telling the Pretoria High Court that she was fearful of Oscar Pistorius and that he should be punished for what he had done to her family. A prison sentence would be appropriate, she said.

Last month Pistorius was convicted of culpable homicide for the death of Steenkamp, whom he killed in his home last year.

Martin was followed in the witness stand by the acting national commissioner of correctional services, Zach Modise, who told the court that his department's facilities were more than adequate to cater for the needs of disabled prisoners.

He testified that the hospital section of the Kgosi Mampuru prison in Pretoria had single cells and bath facilities. Of the section's 22 cells, seven are currently occupied.

Modise said that following an assessment by the department, it was likely that Pistorius, due to his disability, would be placed there were he to be sentenced to serve jail time.

Modise also told the court that recent testimony by correctional services officials in the extradition hearing of Shrien Dewani in the United Kingdom had shown that South African prisons meet international standards.

He accepted, however, that gangsterism and violence were a problem in local prisons, but his department was working to counter these.

During cross-examination by Pistorius’s lawyer advocate Barry Roux, Modise said that he was not aware of any threats made by gang members against Pistorius, as reported in some newspapers earlier this year.

He also responded to allegations of torture in prisons made by The Wits Justice Project during portfolio committee hearings in parliament earlier this week by branding the organisation as one headed by journalists who would go out of their way to report anything negative.

Towards the end of Modise's testimony, bouncer and former Brett Kebble murder accused Mikey Schultz arrived in court and sat next to Pistorius’s sister Aimee and her family, causing Aimee to burst into tears.

After prosecutor Gerrie Nel was granted an adjournment to prepare for his last witness, there was agitation among members of the Pistorius family as Schultz left the court room in the company of former soccer player Marc Batchelor and Justin Mortimer, the man involved in a nightclub altercation with the Blade Runner in Sandton in July.

Aimee told members of the media sitting behind her that Schultz had mouthed the words "f***k you" to her while sitting in the gallery.

It remains to be seen whether Roux will raise the question of intimidation when court resumes at 2pm today.

It is not known who Nel will call to the witness stand next, but it seems that he and Roux have agreed that following this evidence, they will be ready to make closing arguments with regards to sentencing.