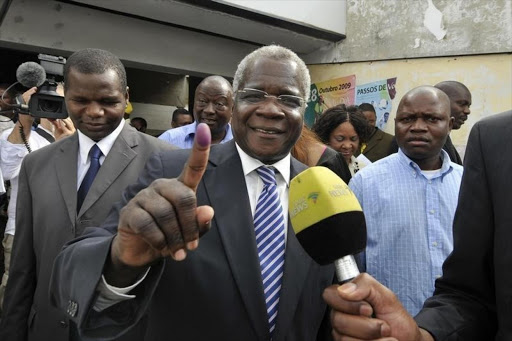 Mozambique's former rebel leader Afonso Dhlakama is pulling huge crowds on his presidential election campaign, to the surprise of observers who wrote him off after his long exile in the bush.

Dhlakama emerged just a month ago from the remote Gorongosa mountains in central Mozambique to sign a peace pact with the government.

That deal ended an insurgency lasting nearly two years and allowed him to join the race for presidential elections on October 15.

That vote will decide who runs a country still emerging from a brutal civil war that killed an estimated one million people, but which is now rapidly growing thanks to vast coal and gas deposits.

Despite hitting the campaign trail later than his opponents, Dhlakama's rallies have drawn massive crowds.

Thousands packed the airport of the second largest city of Beira on Sunday, broke through security cordons and streamed onto the tarmac when his plane landed.

In similar scenes last week, crowds massed on the landing strip in the remote northwestern Angonia region, near the Malawi border, initially preventing his plane from landing.

"I have never seen this before," Dhlakama said in Tete.

In Sofala province, where civilians bore the brunt of the recent unrest, largely blamed on Renamo, the turnout at Dhlakama's rallies was just as overwhelming.

"There were more people than you ever saw," said Muxungue resident Obete Samuel. "They welcomed him as the messiah."

Dhlakama saw his electoral support wane from 47 percent in 1999 to 16 percent a decade later, leaving political analysts with no choice but to write him off a "has-been".

"I personally thought he was marginalised," said Antonio Francisco, a researcher at Mozambique's Institute for Social and Economic Studies.

But "he has resuscitated himself politically" and his campaign is like an "emotional tsunami", said Francisco.

Dhlakama, 61, is arguably the best-known of the three presidential candidates, having run in all four presidential polls since the end of the civil war in 1992.

Mozambique Democratic Movement candidate Daviz Simango, the mayor of Beira, has also run for the presidency before.

Despite his relative obscurity, Nyusi is widely expected to win as Frelimo has been in power since Mozambique won independence from Portugal in 1975.

The incumbent, Armando Guebuza, is stepping down after serving the maximum two terms.

But far from being punished for his role in the low-level but deadly insurgency in central Mozambique that included ambushes on civilian cars by suspected Renamo supporters, Dhlakama's image may have received a boost in some quarters.

Not since Mozambique's iconic first president and Frelimo leader, Samora Machel, has anyone managed to mobilise such crowds, according to Francisco.

"Many young people see him expressing an attitude they are scared (to express)," he said.

"He has no t-shirts (to hand out) no music, he has nothing," but still manages to attract crowds. "This is very interesting."

Dhlakama is presenting himself less as a naysayer than in his previous campaigns, appearing relaxed and exuding a conciliatory tone towards his political foes.

He has even promised that, if elected he would offer Frelimo some cabinet posts.

Among his campaign pledges, Dhlakama is telling residents of coal-rich areas he will ensure they benefit from resources being extracted under their feet.

"It is a concrete, relevant, positive message," said political analyst Joseph Hanlon. That is "an attitudinal change that will make him more attractive to voters."

Whether the mass numbers at rallies will translate into votes is far from certain.

Most observers say there is a strong element of "curiosity" driving attendance.

Many are desperate to see Dhlakama in the flesh after long months during which he was rumoured to be dead.

While Dhlakama might be riding high at the moment, his campaign machinery remains weak compared to that of Frelimo.

"It is a one-man show. That is his problem," said Hanlon.

One concern is that the mass turnouts could build expectations of a win among Renamo's supporters that could prove dangerous if the party loses.