Misspending to be exposed: Nxesi 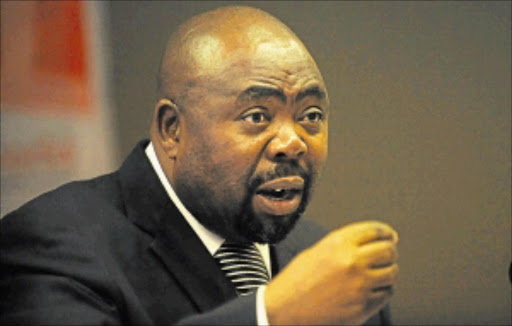 Stood up to Zuma: Thulas Nxesi

The extent of irregular expenditure in the public works department will be laid bare and legal processes will be pursued, Minister Thulas Nxesi said on Monday.

"I am doing this because I believe to promote good governance you need to be transparent and accountable. That transparency will help expose any irregularities," he told reporters in Pretoria.

"Accountability for all of us is the culture I am trying to inculcate at public works. That is my philosophy. We have always been in the public eye about scandals, but we are turning that around now."

Nxesi said efforts to improve the department had unearthed irregular expenditure running into billions of rands.

"The public works turnaround has uncovered R34.9 billion irregular expenditure, some of which goes back as far as 2001," he said.

Of this total, R1.1bn was suspected to have been lost to fraud and corruption.

"The value of irregular expenditure that is reported in the annual financial statements of both the [department's] main vote and the PMTE [property management trading entity] has increased substantially to a combined figure of R34.9bn. In a word, [it is] shocking," said Nxesi.

Some public works employees were sacked while investigations and criminal cases were being pursued.

"In this financial year, about 15 cases are being investigated including the Nkandla investigation by the SIU (Special Investigating Unit)."

Some of the employees allegedly involved had since left the department. He listed several cases including employees and property moguls.

"An official at the Pretoria regional office, Mrs Keneilwe Matlodi, is facing criminal charges in the commercial crimes court after allegedly soliciting R600,000 from a service provider," said Nxesi.

He said the department had laid criminal charges against former official Noyoliso Ntwana, who was found guilty in a disciplinary hearing in connection with R63 million spent on the renovation of ministerial houses in Pretoria.

Civil matters, some involving Shabangu and Van Niekerk, were being pursued.

Public Protector Thuli Madonsela earlier this year found Zuma and his family had unduly benefited from the upgrades.

Public spending on the security upgrades turned into one of the major controversies of the Zuma presidency, as costs escalated to R246m. It emerged the project included a swimming pool (called a "firepool" by the government), an amphitheatre, a cattle kraal, and a chicken run, among others.

Madonsela recommended Zuma repay that part of the money not spent on security.

On Monday, Nxesi said the irregular transactions in the department did not necessarily mean fraud had been committed.

"The department may have obtained value through such transactions although some technical discrepancies occurred during the procurement or payment process."

The matter was uncovered during the department's review of all transactions dating back to 2009/10.

Nxesi said he would table his department's annual report in Parliament on Tuesday.