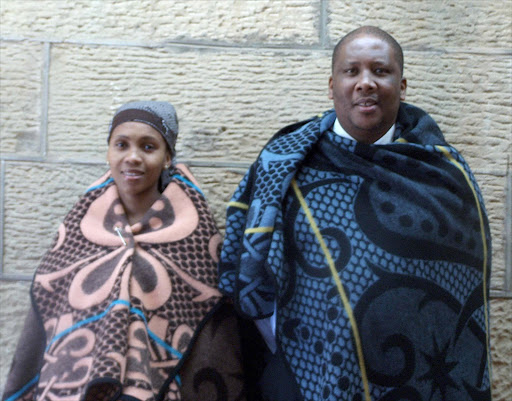 Amid a political crisis that has engulfed the tiny kingdom of Lesotho following last month's attempted coup, a member of the royalty is calling for a more muscular monarch.

It's nearly four weeks since Lesotho was thrust into political turmoil.

In recent days there has been a shootout between police and military, two leading journalists were arrested for "provoking the peace" and a "renegade" military commander still refuses to surrender.

The regional South African Development Community (SADC) bloc is involved in shuttle-mediation and has started deploying police "observers" from the various member countries.

For Basotho, as the people of the country are called, the blow to national pride compounds the anxiety of insecurity.

Watching the politicians struggle to solve their own differences, one member of the Basotho royal family is now offering a solution: empower the king.

"Where are we as a nation, that whenever we have a political fall-out, we always need foreign intervention?" Prince Seeiso said in an interview with AFP in Maseru on Tuesday.

"Let's step back and ask: 'Are there any internal mechanisms, or voices of reason, amongst us?' Yes, there is someone among us who can step into that role to mediate, His Majesty."

"Allow His Majesty to slam on the brakes, when needed," says Prince Seeiso. "To say, 'Guys, you're overshooting your mark, you're overzealous. Come to the table to see where the problem is, before it boils out of Parliament -- and into the streets.'"

It's a compelling notion in a heavily politicised atmosphere.

Factions all around the dysfunctional coalition government seem to be hardening their positions, as are the opposition, the military and the police.

Introducing the idea of a more muscular constitutional monarchy into this crisis -- as opposed to the other kingdom in southern Africa, Swaziland, where King Mswati III rules as Africa's last absolute monarch -- would surely stir debate.

The majority of people of Lesotho see the monarch as a "neutral force", says Michigan State University professor of African History, John Aerni-Flessner.

But political leaders "have always seen it as a stumbling block to their own consolidation of power."

Since independence, Lesotho has been consumed by political bickering, military control, one-party rule, shifting alliances, and at least five coups.

Nevertheless, many Lesotho nationals have maintained deep respect for the king, and his cultural role as unifier of this mono-ethnic, mono-lingual nation of some 1.8 million.

The country's first king, Moshoeshoe I, united the historic clans and sub-clans scattered across the Maloti Mountains during the 19th century.

"Our primary role as traditional leaders has been to keep the nation tranquil and at peace with itself."

"Where there are instances of breakdown, a chief is traditionally expected to come in and mediate."

Since 1993, King Letsie, 51, has been subject to a constitution that renders him a titular rubber-stamp of the prime minister and the parliament's decisions. And there's a section of the constitution that enables the premier to bypass him.

That leaves the king little space to manoeuvre, says Seeiso.

"The architects of the constitution cut the cloth very slim, so that it doesn't give much room for His Majesty to exert any real power," says Seeiso, 48.

The king's silence during the crisis, though, hasn't gone unnoticed.

"Where is the king?" asks a Maseru waitress, believing only he can put a stop to the country's woes.

Seeiso acknowledges that his brother faces a dilemma. Each faction scrutinises everything he says or does, and he risks being accused of bias.

"Our silence ... should not be construed as if we are unaware or disengaged," said Seeiso, inferring the royal family is involved in behind-the-scenes diplomacy.

The SADC is lobbying the political factions to either re-open parliament -- suspended since June -- or call for early elections.

Some now are also calling for constitutional reforms to avoid such breakdowns in the future.

That creates an opportunity for the king to press for changes as well.