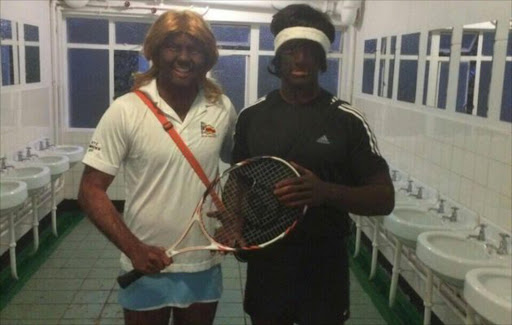 Controversy over a "blackface" incident involving two Stellenbosch university students erupted on Heritage Day as the institution assured an investigation would take place.

"Stellenbosch University (SU) strongly disapproves of any action that could possibly offend any of its students, staff and members of the public," said university spokeswoman Susan Van Der Merwe in a statement issued on its website.

She said that the university disapproved of any situation "contradictory" to the Constitution or the "welcoming campus culture" it hoped to promote.

The acting rector and vice-chancellor Prof Leopoldt van Huyssteen had on Tuesday requested an investigation into the matter as thus far the university management only had Twitter as a source of information.

"He had also requested all resident and visiting heads of residences, private student organisations and clusters to discuss the sensitivity of such actions with their student leaders and students."

Two photographs of two white male students with their faces smeared black and wearing wigs and outfits meant to represent tennis stars Serena and Venus Williams have been widely circulated on Twitter.

The university said it would be "premature" to jump to conclusions or anticipate what actions would be taken before the investigation was concluded.

"The SU management will consider appropriate steps pending the outcome of the investigation."

Van Der Merwe said the matter had "ignited debate" on its campus.

According to The Star newspaper, the photographs - apparently taken at a 21st birthday party - first appeared on Instagram with the caption "Let's hope they don't get kicked out the varsity for this one".

Earlier this month, it was reported that an investigation into the conduct of two University of Pretoria students who were photographed in domestic worker outfits and smeared with black paint was still ongoing.

Last month, a photograph of the two female students posing at a party with headscarves and padded bottoms was distributed on social media.

The students were then temporarily suspended from their residences.

The SA Human Rights Commission is also conducting an investigation into the University of Pretoria matter.

On Wednesday, response to the University of Stellenbosch students' photographs streamed on Twitter.

Aphiwe @Lhoza01 tweeted "Privilege is so nice guys," in response to @KyleLaduma who tweeted "If you can't express why you're offended, nobody will understand it".

Meanwhile, Zimasa Mpemnyama @Zimasa91 tweeted "More #blackface & more stupid 'its just fun' comments. Blackface is Never Okay" while Pontsho Pilane @Pontsho_Pilane questioned "Why are we, black people,subjected to scorn and disdain on such a regular basis?"

Unicorn Whisperer @mitchwongho tweeted " #blackface: It's acceptable when Leon Schuster does it."