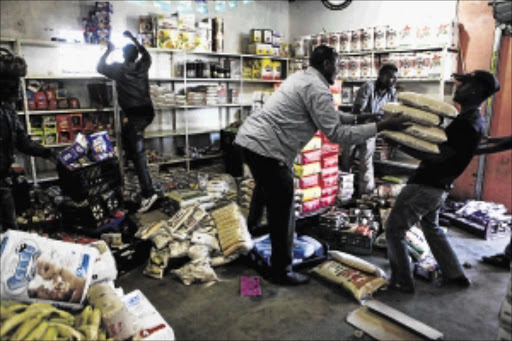 ENTREPRENEURIAL: Foreign traders say the only means of survival for them is by starting their own businesses Photo: LAUREN MULLIGAN

FOREIGN traders in Limpopo are heading to the Supreme Court of Appeal (SCA) in a bid to have their rights to do business recognised and stock confiscated by police returned.

Today, the SCA will hear arguments by the Somali Association of SA and the Ethiopian Community of SA, who are demanding that Police Minister Nathi Nhleko, his labour and home affairs counterparts Mildred Oliphant and Malusi Gigaba, respectively, as well as Limpopo safety MEC Mapula Mokaba-Phukwana stop "Operation Hardstick".

Operation Hardstick was initiated by Limpopo police to shut down businesses operating without permits. Some traders and their employees were arrested.

Somali and Ethiopian traders, who are represented by Lawyers for Human Rights, said police told them the permits must be in their own names and not their landlords and that foreigners are not allowed to run businesses in SA, according to court papers.

Foreign traders also claim they are unable to find employment in SA because of several barriers such as language difficulties, shortage of meaningful skills due to conditions in their countries, competition from local job seekers and xenophobic prejudice.

They say the only means of survival for them is by starting their own businesses.