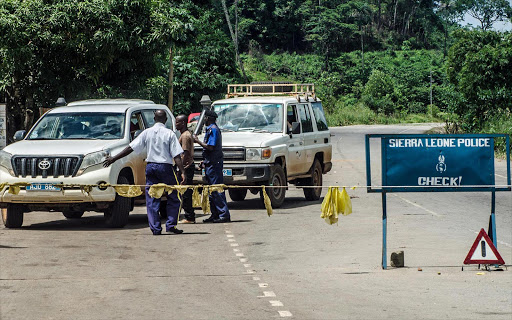 Sierra Leone launched on Friday a controversial three-day shutdown to contain the deadly spread of the Ebola virus, as the UN Security Council declared the deadly outbreak a threat to world peace.

Most of Sierra Leone's population of six million were confined to their homes from midnight (0000 GMT), with only essential workers such as health professionals and security forces exempt from the lockdown.

Almost 30,000 volunteers will go door-to-door to educate locals and hand out soap, in an exercise that could lead to scores more patients and bodies being discovered in people's homes.

Health experts have criticised the shutdown, arguing that coercive measures to stem the epidemic could backfire and would be extremely hard to implement.

Doctors Without Borders (MSF) warned that lockdowns may end up driving people underground "and jeopardise the trust between people and health providers".

But the government said it was determined to proceed with the move. "Rain or shine, the shutdown exercise is going to go ahead. During the three days... the job is going to get done," said Steven Gaojia, head of the government's emergency Ebola operation centre.

The extreme measure comes amid mounting global concern over the Ebola epidemic, which has so far killed more than 2,600 people in west Africa.

Paranoia over Ebola is so rife that in Guinea, seven people sent to educate villagers on the disease were found dead after coming under attack from locals who apparently feared the delegation meant them harm.

In New York, the 15-member United Nations Security Council unanimously adopted a resolution declaring that the "unprecedented extent of the Ebola outbreak in Africa constitutes a threat to international peace and security".

It called for immediate aid and urged nations to lift travel and border restrictions, and asked airlines and shipping companies to maintain their links with affected countries.

Ebola fever can fell its victims within days, causing severe muscle pain, vomiting, diarrhoea and -- in some cases -- unstoppable internal and external bleeding.

More than 550 people have died from the disease in Sierra Leone alone, one of the three hardest hit nations alongside Guinea and Liberia.

"Ose to Ose Ebola Tok" -- "House-to-House Ebola Talk" in the widely-spoken Krio language -- will see more than 7,000 volunteer teams of four visiting the country's 1.5 million homes over the next few days.

They will educate locals on how to prevent infection, as well as set up neighbourhood watch-style community Ebola surveillance teams.

The government has said the volunteers will not enter people's homes but will call emergency services to deal with patients or bodies of which they become aware.

Extra beds have been set up at schools and hospitals across the country, including 200 in and around Freetown, with the government projecting an upsurge in cases of up to 20 percent as new patients are discovered.

The lockdown has broadly been welcomed by community leaders and residents of Freetown.

"We shall be praying that the operation will end the scourge. We support the government," said 60-year-old Samuel Johnson, a father-of-three who recently lost a daughter to Ebola.

In Guinea, the government said seven people who were part of a team sent to educate villagers in the southeast about Ebola had been found dead.

The team had been missing after coming under attack from stone-throwing locals on Tuesday.

"It's very sad and hard to believe but they were killed in cold blood by the villagers," government spokesman Albert Damantang Camara told AFP, adding that the bodies were recovered from a septic tank in the village of Wome.

Prime Minister Mohamed Said Fofana condemned the killing, saying it "demonstrates an intolerable and unacceptable cruelty, whatever the circumstances".

It was not immediately clear what prompted the violence, but the spread of Ebola has been accompanied by paranoia and mistrust.

Many Guineans believe local and foreign healthcare workers are part of a conspiracy that either deliberately introduced the outbreak, or invented it as a means of luring Africans to clinics to harvest their blood and organs.

Meanwhile, the first French national to be infected by the virus was repatriated late Thursday and hospitalised close to Paris.

The patient, a volunteer for Doctors Without Borders (MSF), caught the virus in Liberia.