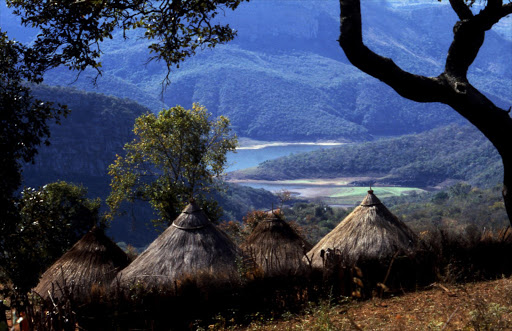 For centuries, the legends surrounding Lake Fundudzi protected it from economic exploitation and sedimentation. But now, one of southern Africa's most important sacred natural sites is in danger.

There are many stories about the clear blue waters of Lake Fundudzi -from the ashes of chiefs believed to be dispersed in it to the white python residing there who rules over the drowned inhabitants of a cursed village.

The truth hinges upon one's beliefs. What cannot be disputed is that the northern South African lake, held tight in the rough embrace of the foothills of the Soutspansberg mountains, is facing stresses like never before as economic and tourist interest increases in the region.

At the centre of the lake's mythology is the belief that the ancestors of some Venda chiefs - an ethnic group comprising more than a million people - placed the leaders' remains there. It is one of the most important sacred natural sites in southern Africa.

For centuries, beliefs about its sanctity helped to protect it from the stresses of modern society. But increasing human settlement and economic activity in the area are creating worries about its long-term survival.

Houses with fruit orchards can be seen on slopes surrounding the lake. Hillsides have been hacked bare to prevent wildfires from reaching industrial pine forests planted above.

"Human activity is increasing erosion and silting to the point that Lake Fundudzi could disappear within 200 years," says retired professor Ben van der Waal, an expert on the lake.

The only natural inland lake in South Africa was declared a national heritage site in February, putting it on a par with the late president Nelson Mandela's house in Soweto or the government seat Union Buildings in Pretoria. But there is controversy about whether the measure will help to protect it.

Some local campaigners have argued that the decision to declare Lake Fundudzi a national heritage site is only aimed at promoting tourism and job creation, while ignoring its spiritual value.

"We don't yet know what the measure means. But more and more buildings could be erected around the lake," sculptor Mishack Raphalani said.

A bumpy sand road leads to the compound of Samuel Netshiavha, head of a clan known as The People of the Pool, who act as guardians of the lake. He does not want to comment on reports that ashes of Netshiavha chiefs continue being put in the lake. "That cannot be discussed," he says.

Legend has it that a passing leper was refused food and shelter. He cursed the village, which sank into the waters of Lake Fundudzi.

A village may well have drowned here, because the lake was formed by a landslide, said Rachidi Molapo, historian at the University of Venda. The lake, measuring about 140 hectares, is estimated to be at least 10,000 years old.

The inhabitants of the drowned village are said to live on underwater under the rule of a white python, which University of Venda anthropologist Godfried Dederen describes as "the personification of creative forces" associated with water and its fertility.

A white crocodile is also said to live in the lake. Legend has it that every time a Venda king - today a regional figurehead - dies, the crocodile coughs up a stone which the new monarch has to swallow. Asked whether the story was true, Netshiavha replied, "I cannot disagree with it."

Local people still perform rituals on the shores of Lake Fundudzi to celebrate the new harvest or to ask for rain, Netshiavha said. Offerings to the ancestors include traditional beer that is poured into the lake.

But the beliefs, which had kept people from approaching the lake without permission, are rapidly weakening.

Cattle graze in the area and patches of forest have been hacked down to clear space for maize and other fields, fruit trees, and to obtain firewood. The creation of a road, removal of vegetation and invasion of alien vegetation around the lake have further increased erosion. Studies have also reported deterioration of water quality in Lake Fundudzi.

Other sacred sites related to the lake are also being encroached upon.

Picnic sites have been set up near the Thathe Vondo forest, where Venda kings are believed to be buried - one of them is said to appear from time to time as a white lion. Industrial pine plantations have made the forest shrink and have even made inroads into Thathe Vondo itself.

Cottages for tourists have been built close to the Phiphidi waterfall, where people bring offerings meant for half-human spirits known as the zwidudwane.

Samuel Netshiavha believes tourism can benefit the Venda region - located in Limpopo province, one of the poorest in South Africa - if it is "well planned and managed."

"We will make plans to restrict land use around the lake," said Malange Avhurengwi from the environmental department of the Limpopo provincial government.

But even if such measures are taken, they may not be as powerful in protecting the lake as legends.

Local people say they sometimes hear drumming from Lake Fundudzi, see clothes washed by spirits drying on rocks, and even see spirits wandering around its shores. But the younger generation no longer shows much interest in the legends.

"If you do not service the spirits, they will lose their strength and will no longer help you,"