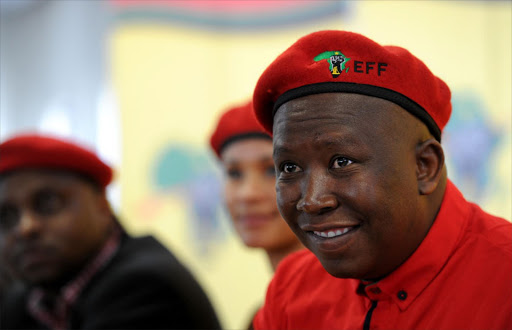 Botswana's refusal to grant EFF leader Julius Malema a visa showed that its President Ian Khama was a dictator, the party said on Friday.

"The Economic Freedom Fighters condemns the refusal by the autocratic

military government of Botswana to grant the CIC [commander in chief] Julius Malema a visa," its national spokesman Mbuyiseni Quintin Ndlozi said in a statement.

"There are absolutely no grounds for a so-called democratic country to refuse a person a visa merely on the basis that he holds a different political view to that of the government."

Malema's expulsion from the African National Congress in 2012 was partly because he threatened to bring about regime change in Botswana.

In July 2011, Malema said there was a vacuum in the ideological and political leadership of Africa and the subregions, The Sunday Times reported at the time.

He reportedly said the ANC Youth League intended establishing a Botswana command team, which would work towards uniting all oppositional forces in Botswana "to oppose the puppet regime of Botswana, led by the Botswana Democratic Party".

"The BDP is a foot stool of imperialism, a security threat to Africa and always under constant puppetry of the United States."

According to the newspaper, he said the ANCYL would help to bring about change in a "democratic manner".

"We know that Botswana is in discussions to open a military base for the imperialists and the present government of Botswana has the potential to co-operate in this manner."

He reportedly said a detailed plan would be unveiled once a team had been established to handle the situation in Botswana.

"There is no army involved here, there is nobody who is going to be trained and overthrown though a coup."

Malema reportedly said that, after the "interaction", a coalition party might be formed because the ANCYL believed opposition parties in Botswana were not strong enough to "properly topple that government through democratic means".

The EFF said on Friday that the Botswana governments refusal to grant Malema a visa confirmed that Botswana was not a democratic country.

"There can never be a democratic country that refuses those who disagree with the acts of its government permission to be visit it," said Ndlozi.

Neither did a democratic government arrest journalists, as Botswana had following the arrest of Sunday Standard editor Outsa Mokone, for publishing a critical story about ruling "dictator" Khama.

On Wednesday, the French news agency Agence France-Presse reported that Mokone had been charged with sedition after a story claimed the president had been involved in a car accident, which prompted angry allegations of stifling press freedom.

Mokone was arrested on Monday about a story alleging Khama had a night-time crash, which resulted in the other driver being given a new Jeep.

A defiant Mokone has since been released, but he vowed to fight the charges.

Ndlozi said this was particularly important in light of approaching elections, which meant Khama was suppressing dissent to stay in power.

"First the CIC Julius Malema has been subjected to a process where he is the only citizen of the 50 million plus South Africans who needs a visa to visit what is a SADC country," he said.

"Secondly, Botswana treats the CIC as the only leader of a party represented in the Parliament of South Africa who cannot be permitted to visit Botswana."

Essentially, Botswana had rejected a representative of the people of South Africa a right to visit the people of Botswana, treating Malema as if he was terrorist.

The EFF further condemned the silence of the South African government, particularly the internationals relations and co-operation department, on the matter.

"This autocratic military government of Botswana has refused CIC a visa even when the Batswana people want him to visit. Botswana is afraid of the power of his message and the message of economic freedom."