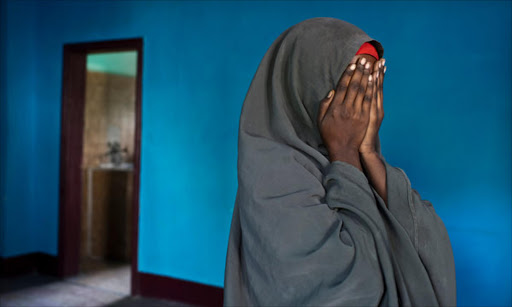 Internationally-funded African Union troops in war-torn and impoverished Somalia have raped women and girls as young as 12 and traded food aid for sex, Human Rights Watch said in a damning report Monday.

"Some of the women who were raped said that the soldiers gave them food or money afterwards in an apparent attempt to frame the assault as transactional sex," the HRW report said.

There was no immediate reaction from the AU force AMISOM, whose 22,000 soldiers drawn from six nations have been fighting alongside government troops against the Al-Qaeda-linked Shebab insurgents since 2007.

The vulnerable women largely came from camps in the capital Mogadishu, having fled rural Somalia during a devastating famine in 2011.

AMISOM donors include the United Nations, European Union, Britain and the United States.

The AU soldiers, "relying on Somali intermediaries, have used a range of tactics, including humanitarian aid, to coerce vulnerable women and girls into sexual activity," the report read, based on testimonies of 21 women and girls.

"They have also raped or otherwise sexually assaulted women who were seeking medical assistance or water at AMISOM bases."

The youngest interviewed was aged just 12, who said she was raped by a Ugandan soldier.

Several of the women described how they had gone to the AU camp seeking medicine for their sick babies.

"The findings raise serious concerns about abuses by AMISOM soldiers against Somali women and girls that suggest a much larger problem," HRW added.

Only in two cases had the women who spoke to HRW filed police complaints, because they "feared stigma, reprisals from family, police, and the Islamist insurgent group Al-Shebab."

The cases investigated by HRW involved troops from Burundi and Uganda.

AMISOM troops last month launched a major offensive aimed at seizing key ports and cutting off an important source of revenue for the Islamist rebels.

HRW said the force needed to end the abuses carried by its troops.

"The AU military and political leadership needs to do more to prevent, identify, and punish sexual abuse by their troops," said HRW Africa head Daniel Bekele.

"As another food crisis looms in Mogadishu's displacement camps, women and girls are once again desperate for food and medicine. They should not have to sell their bodies for their families to survive."

Conditions in Somalia remain dire, with the United Nations and aid workers warning that large areas are struggling with extreme hunger and drought, three years after famine killed more than a quarter of a million people.

The UN last week said over a million people were classified in either "crisis" or "emergency" situations, just one step short of famine on its hunger scale.

The mother of one girl who was raped told HRW she was deeply traumatised by the attack.

"People laugh at her whenever she comes out. They say, 'An infidel raped her'," the mother said.

"How can you feel if your daughter asks you... 'Mother, I better die to hide my shameful face from the people'?" she added.

"Several women said that the soldiers refused to wear condoms and that they had caught sexually transmitted infections as a result," HRW added.

"Several also described being slapped and beaten by the soldiers with whom they had sex."